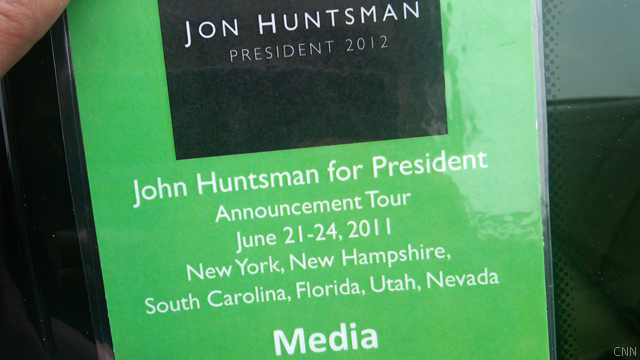 Bumps on the Huntsman road

(CNN) - The presidential announcement of former Utah Gov. Jon Huntsman looked flawless on television, but it wasn't without some snafus off stage.

Members of the media were handed press passes upon arrival at his event in Liberty State Park, New Jersey, which not only spelled Huntsman's first name incorrectly as "John" instead of "Jon," but also labeled the announcement state as "New York" instead of New Jersey.

The campaign stopped distributing the credentials. When asking for his, CNN's Shannon Travis was told "we're not handing them out right now."

The press corps and campaign staff traveling with the former U.S. ambassador to China as he campaigns in New Hampshire was then led to a plane bound for Saudi Arabia, instead of the Granite State.

A Huntsman official said there was confusion on the part of the Port Authority.

- CNN's Erika Dimmler and Shannon Travis contributed to this report