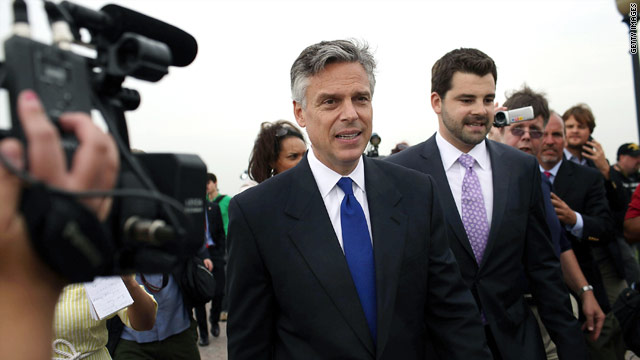 Moments after announcing his presidential bid on Tuesday, Jon Huntsman boarded a specially-chartered jet – along with a coterie of family, staffers and the traveling press corps – and headed to New Hampshire on his inaugural trip as a newly-minted candidate.

The Republican candidate is set to campaign in Exeter, his only post-announcement campaign stop for the day. Later Tuesday night, Huntsman will attend a fundraiser in New York City, campaign aides say. On Wednesday, he heads to South Carolina.

The 737 jet, emblazoned with Continental's name and logo, seemed an apt political metaphor for the well-traveled former U.S. ambassador to China and former Utah governor. On the plane, he sat in the first seat of the first row in what would typically be first class.

Clearly this was no typical flight.

Before takeoff, wife Mary Kaye Huntsman navigated her way past the crush of reporters crowding the narrow aisle.

"Everyone okay?" she asked members of the press either seated, munching sandwiches and chips or still trying to locate their assigned seats. "Thanks for coming," she added.

Other family members on board also sat near the front of the aircraft. An aide sent an email to reporters that all seven Huntsman children were with the family except one, "Jon III who had obligations at the Naval Academy."

Also spotted near the front, seat signs with "Mrs. Romney" and "John Romney" printed on them. Might either be related to fellow presidential candidate -and fellow Mormon- Mitt Romney?

No, Huntsman spokesman Jake Suski told CNN "They're donors," before later clarifying that they're "family friends."

In flight, Huntsman was interviewed by an ABC News crew, apparently the only outlet allowed a few moments with him on the 43-minute trip.

When asked how Huntsman was feeling on his first trip as a new candidate, Suski told CNN, "Energized and excited to get on the ground in the first-in-the-nation primary state."