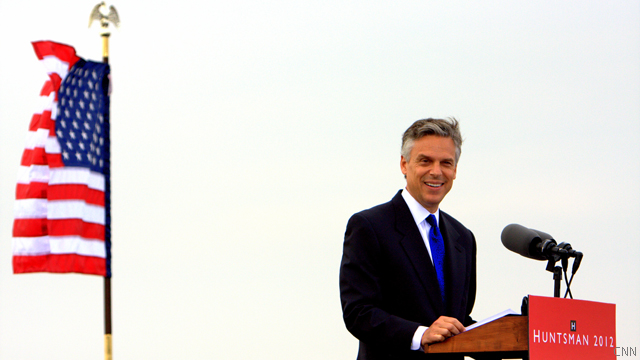 Huntsman took aim at the sluggish economy and mounting national debt in his remarks.

Click to watch video
"We are about to pass down to the next generation a country that is less powerful, less compassionate, less competitive and less confident than the one we got. This is totally unacceptable and totally un-American," Huntsman said.

Launching his bid for the GOP presidential nomination in front of the Statue of Liberty, Huntsman paid tribute to Ronald Reagan in his remarks. Reagan kicked off his successful 1980 general election campaign from the same spot.

"He assured us we could 'make America great again,' and under his leadership we did. I stand in his shadow as well as the shadow of this magnificent monument to our liberty," Huntsman said.

Huntsman served as Ambassador to China under President Obama, a sticking point for some Republicans. The former diplomat called for a more civil tone toward the president in the upcoming campaign.

"He and I have a difference of opinion on how to help the country we both love," Huntsman said. "But the question each of us wants the voters to answer is who will be the better president; not who's the better American."

The Obama re-election campaign was quick to respond to Huntsman’s announcement speech.

“Governor Huntsman called for a more competitive and compassionate country, but he has embraced a budget plan that would slash our commitment to education, wipe out investments that will foster the jobs of the future and extend tax cuts for the richest Americans while shifting the burden onto seniors and middle class families,” the campaign said in a statement.