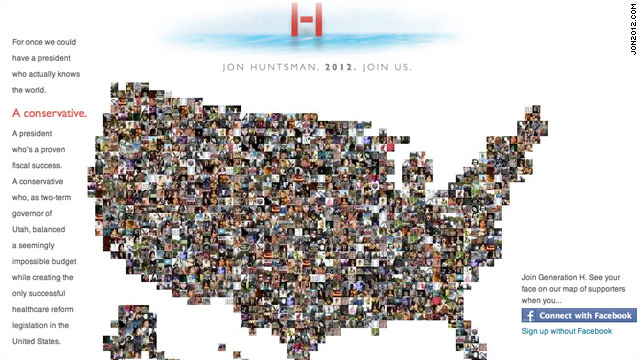 Washington (CNN) – "For once we could have a president who actually knows the world."

Those are the words that will greet visitors to the brand new campaign website of former Utah Gov. Jon Huntsman, who begins his White House bid Tuesday with a speech near the Statue of Liberty.

Never mind that President Barack Obama lived overseas as a youth and has made restoring America's reputation in the world a central theme of his presidency.

Huntsman's pitch, according to Jon2012.com, is that unlike his Republican foes, he possesses the unique combination of foreign policy acumen and executive experience to walk into the White House and lead from day one.

It's time for America to "regain strength" and "own the 21st century," Huntsman says in one of the site's many web videos highlighting his foreign service under three presidents, most recently as President Obama's ambassador to China.

But as Huntsman sees it, fixing the sluggish American economy is more pressing than any foreign pursuit.

The website, previewed to CNN before it goes live following Huntsman's speech, is sleek, modern and, according to campaign officials, very iPad-friendly.

The site's clean look calls to mind an artsy Tumblr blog or Facebook page as much as it does a campaign website.

The welcome page will display a new web video for every day of the 2012 campaign. Supporters are immediately invited to connect with the Huntsman campaign on Facebook, after which they can see their profile picture inserted into a composite map of the United States.

Huntsman's field organizers and state directors will be able to tap directly into the voter contact information collected on the site, developers say. There will also be a rapid response section reminiscent of the Obama campaign's "Fight the Smears" effort in the 2008 race.

And Huntsman's charmed life story - he is the son of a wealthy executive who played in a rock band and went on to serve four presidents and win two gubernatorial elections in Utah - is presented not as text, but as an interactive, photo-heavy timeline.

The goal of the ambitious web rollout is to present Huntsman as a Republican who can run an interactive and tech-savvy campaign as serious as President Obama's.

"In order to beat President Obama, Republicans will need a candidate that can beat him at his own game," Huntsman spokesman Tim Miller told CNN. "From day one, our goal was to build a digital campaign that not only competes with but outshines President Obama's online operation."

Perhaps the most revealing elements of the site are the many web videos, several of which feature his wife, Mary Kaye. The site is "very video-centric, very video-heavy," said Ryan Cassin, the campaign's digital strategist.

Though Huntsman makes nary of mention of the president in any of the videos, the website confronts nagging questions about his conservative bona fides and his service in the Obama administration head on.

In one video, Huntsman responds to why he agreed to serve under a Democrat with a simple answer: "Because I love my country."

In another biographical video heavy with Ronald Reagan imagery, a narrator describes Huntsman as "an authentic conservative" who cut taxes and created jobs in Utah.

The videos depict him as a motorcycle-loving, pro-gun, anti-abortion conservative who, as it happens, "makes a mean egg white omelet" and "cranks up the rock."

Huntsman also lays out several policy positions in the videos: He opposes the NATO-led effort in the "tribal country" of Libya, backs Rep. Paul Ryan's controversial plan to reform Medicare, and suggests it's time for American troops to come home from Afghanistan.

One video highlights the "free market" health care reforms Huntsman implemented in Utah and takes a dig at the president and former Massachusetts Gov. Mitt Romney, a rival for the GOP nomination.

"The kind that President Obama and Massachusetts should have studied," a narrator says.

But the careful use of language on the site also makes clear that the soft-spoken Huntsman will never be the sort of Republican who serves up red meat attacks at tea party rallies.

In keeping with the campaign's message that Huntsman is a different sort of Republican, a video narrator describes him as "a quiet, no-drama conservative" and "never a pot-stirrer."

"Not all modern conservatives must be loud or angry," the narrator says over soothing guitar strums. "Jon's boss Ronald Reagan knew that."