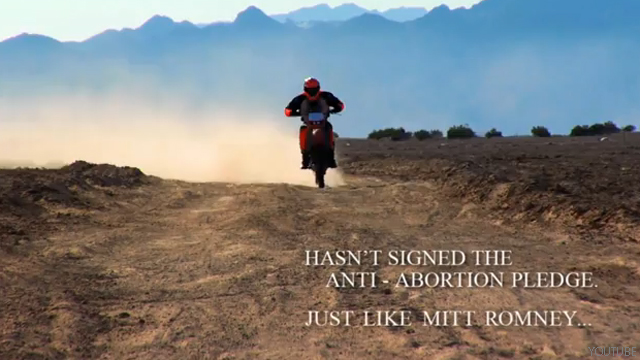 (CNN) - One the same day he formally announced his presidential bid, a rival for the Republican nomination criticized Jon Huntsman for not signing an anti-abortion pledge. But the campaign of the former Utah governor and former U.S. ambassador to China was quick to respond.

A web video released Tuesday morning by the GOP presidential campaign of former Sen. Rick Santorum of Pennsylvania parodies the web videos of a man riding a motorcycle through the desert that the Huntsman team have put out over the past week to tease their candidate's formal declaration.

But the Santorum video has text that says Huntsman "hasn't signed the anti-abortion pledge. Just like Mitt Romney..." and then shows the motorcycle crash landing.

The Huntsman campaign responded, in an email to CNN.

"People who rely on pledges usually don't have a record. Fortunately Governor Huntsman, a life-long, no flip flops pro-lifer, has actually signed anti-abortion legislation into law - that's a signature that makes a difference. Not only that, Jon Huntsman has lived it. He and Mary Kaye adopted two children, Gracei Mei who had been abandoned in a Chinese market and Asha from an orphanage in India," said Huntsman spokesman Tim Miller.

SBA also pointed out that former Massachusetts Gov. Mitt Romney, former Godfather's Pizza CEO Herman Cain and former New Mexico Gov. Gary Johnson had not signed the pledge. The group, a political action committee that among other things helps anti-abortion female candidates, did not mention Huntsman, who was not an official candidate at the time.

SBA said they will send Huntsman the pledge to sign, now that he's formally jumping into the race.

Saturday Santorum criticized Romney for not signing the pledge.