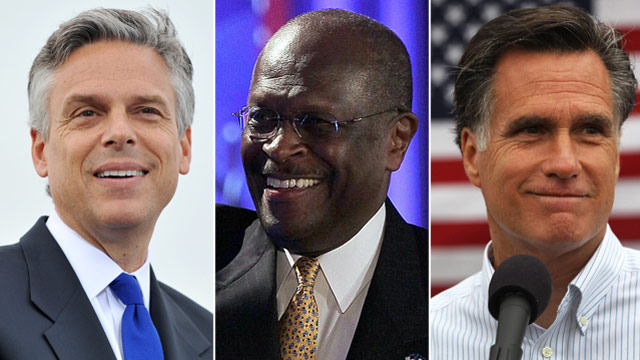 Former Utah Gov. Jon Huntsman: "With America mired in three expensive conflicts, we have a generational opportunity to reset our position in the world in a way that makes sense for our security as well as our budget.

The war in Afghanistan is an asymmetrical war, and our approach ought to adjust accordingly. Our troops have done everything we've asked them to. They've routed the Taliban, dismantled Al Qaeda, and facilitated democratic elections.

Now it is time we move to a focused counter-terror effort which requires significantly fewer boots on the ground than the President discussed tonight.

We need a safe but rapid withdrawal which encourages Afghans to assume responsibility, while leaving in place a strong counter intelligence and special forces effort proportionate to the threat. The War on Terror is being fought against a global enemy, and it is critical that we have the resources to fight them wherever they're found."

Former Massachusetts Gov. Mitt Romney: “We all want our troops to come home as soon as possible, but we shouldn’t adhere to an arbitrary timetable on the withdrawal of our troops from Afghanistan. This decision should not be based on politics or economics. America’s brave men and women in uniform have fought to achieve significant progress in Afghanistan, some having paid the ultimate price. I look forward to hearing the testimony of our military commanders in the days ahead.”

Businessman Herman Cain: President Obama's statement tonight is a stark reminder that while one might campaign in poetry, one must govern in prose.

While all Americans hope and pray for a speedy, victorious resolution to the war in Afghanistan that prevents the continued loss of our national treasures- our men and women in uniform- and our national treasury, how we define an honorable exit remains to be seen.

The President suggested that we cannot become isolationist or engage in every international conflict, but instead, we must charter a "middle course." How does he define this? It seems to be yet another foggy foreign policy coming from this administration.

Instead of providing the American people with clarity, President Obama proposes an abrupt withdrawal of our troops that could potentially compromise the legitimate gains we have made in Afghanistan. Sadly, I fear President Obama's decision could embolden our enemy and endanger our troops.

President Obama is correct on one account: it is time for nation-building at home and high time the Afghan people take more responsibility in bringing peace and stability to their own country.

Former Sen. Rick Santorum: President Obama speaks of winding down our engagement in Afghanistan, but he does not emphasize the need for victory. Every American wants our brave men and women home safely, but we cannot let those who've given the last full measure die in vain by abandoning the gains we've made thus far. We must be squarely focused on succeeding in Afghanistan rather than on politically motivated troop withdrawals. Sadly, President Obama doesn't seem to share that commitment.

Former Minnesota Gov. Tim Pawlenty: I thought his speech tonight was deeply concerning. Look how he phrased the outcome of this war. He said we need to end the war 'responsibly.' When America goes to war, America needs to win. We need to close out the war successfully. And what that means now is not nation building. What it means is to follow General Petraeus’ advice and to get those security forces built up to the point where they can pick up the slack as we draw down.

This decision should be based on conditions on the ground and success, not some vague notions of a responsible wind down and then jumping over what the real mission is now which is stabilizing the security of the country.