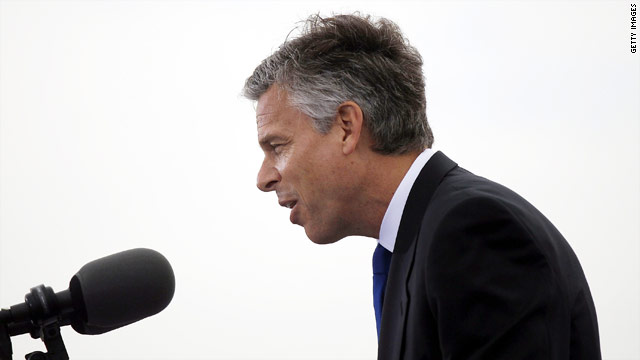 "I think we can go beyond that," Huntsman said Wednesday on CNN's "American Morning." "I'm not a fortune teller here, but I can tell you that at some point, the hundred thousand troops on the ground will have to be taken out substantially. It's heavy, it's expensive, it's disproportionate in terms of where our spending ought to be."

Click to watch video
On Tuesday, an administration official told CNN that Obama will announce 30,000 U.S. "surge" forces will be fully withdrawn from Afghanistan by the end of 2012.

"Other than the pledge of allegiance, I don't do a whole lot of pledges," Huntsman said on CNN's "American Morning."

In order to receive his backing, DeMint said candidates must sign the pledge, intended to put pressure on Congress not to raise the debt ceiling without specific spending cuts. Texas Rep. Ron Paul is currently the only presidential candidate supporting the proposal.

"If any presidential candidate is looking for my support or the support of millions of Americans who are part of this pledge, they're not going to get that support if they're not willing to stand on this very common sense issue," DeMint said on CNN's "American Morning."


Click to watch video
But Huntsman said "real cuts" would accompany the ongoing debt ceiling negotiations in the short-term, adding Congress should adopt a balanced budget amendment in the long-term.

"If you've got compensatory cuts and if you've got a start in terms of a discussion about the balanced budget amendment, something every governor has to deal with … I think that would be a pretty good outcome and I don't need to take a pledge in order to get there," Huntsman said.

The former U.S. ambassador to China under President Obama again defended his service in the Obama administration, an early sticking point among conservatives.

Huntsman, a Mormon, remained optimistic when asked about potential support within the Evangelical Republican voting bloc.