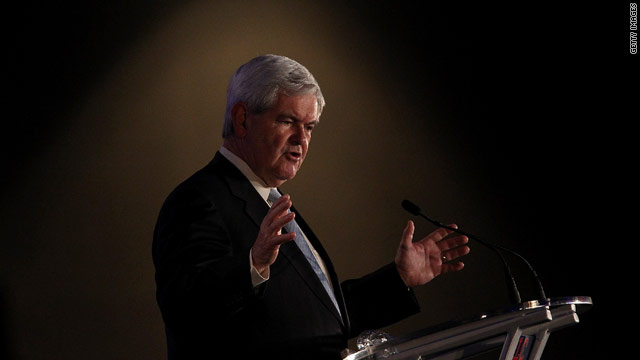 Atlanta (CNN) -Republican presidential candidate Newt Gingrich began his remarks at the Atlanta press club Wednesday with an admonition for the pundits and media already reporting the death of his campaign.

"I want to say one thing about the campaign before I begin," Gingrich said to flashing bulbs and feverishly clacking laptops. "In July of 2007 Hillary Clinton was going to be the Democratic nominee and Rudy Giuliani the Republican (nominee). John McCain was out of money and written off by the press. The fact is campaigns go up and down."

His remarks about the last presidential race were aimed at pre-empting the assembled reporters who were eager to ask him about the missteps plaguing his campaign, including Tuesday's news that his two top finance campaign staff members had quit and the embarrassing disclosure of a second high-dollar credit line he held at the Tiffany's jewelry store.

"I'm not running to talk about the nuances of campaigns" he said, telling members of the media that he would not be answering questions about "campaign process."

Gingrich then focused on the topic at hand – economic policy, reform at the Federal Reserve and the repeal of the Dodd-Frank bill that increased financial regulations in the United States.

Devoting much of his speech to the "big ideas" and "big solutions" he wants to bring to the White House, the former House speaker made only one mention of a current GOP rival (praise for Texas Rep. Ron Paul). But he frequently assailed the man currently occupying the White House.

"We need to replace the food stamp president with a paycheck president" he said of President Barack Obama. "The pain inflicted by the Obama depression runs deep."

His comments coincided with a new initiative and video titled "Who got the money?" on his campaign website demanding an audit of the Federal Reserve.

After his remarks, reporters couldn't resist prodding about the state of his campaign. When asked how he expects to run the massive federal government when he is having trouble doing so with his own staff, Gingrich was quick and careful to refer to his defectors only as "consultants" – painting them as business-as-usual Beltway insiders who do not relate to average people.

Prior to Tuesday's staff defections, sixteen members – including all of Gingrich's paid staff in Iowa – quit en masse June 9th. When asked how many staff members remain on his payroll, spokesman R.C. Hammond said there are "over a dozen" split between Georgia and Virginia. However, Hammond refused to divulge how many staffers the campaign had at its height.