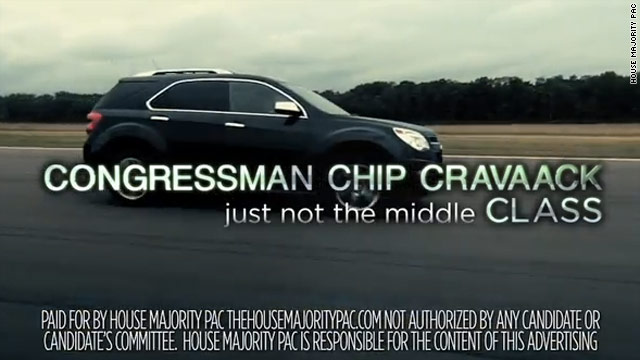 Another ad attack against Cravaack

(CNN)-Democratic House Majority PAC will take a crack at GOP Minnesota Rep. Chip Cravaack Friday with the release of a new ad criticizing the congressman for endorsing a Republican House proposal to dramatically alter Medicare.

The independent expenditure group's main beef with Cravaack is his support of House Budget Chair Paul Ryan's proposal that would require changes to Medicare as a method of battling the budget deficit.

In the ad, quotes from reports that describe the budget as "a plan to essentially end Medicare" that would require seniors to "pay $6,400 more" each year and provide tax cuts of "$200,000" for "millionaires" appear against the backdrop of a man approaching a shiny SUV.

Cravaack has been criticized for $1700 payments made toward his vehicle. According to the Minnesota Post, his office blames the expenditure on distance-Cravaack's 8th district covers a large area in Minnesota-and the unique terms of the lease agreement that had to be in accordance with House regulations.

House Majority PAC was established to help Democrats win back the majority in the chamber in 2012. Its latest ad effort will run from June 24-30 on cable television. And this isn't their first attack against Cravaack. The group previously sponsored a radio ad against the congressman in April that also focused on his vote for the Ryan budget plan.