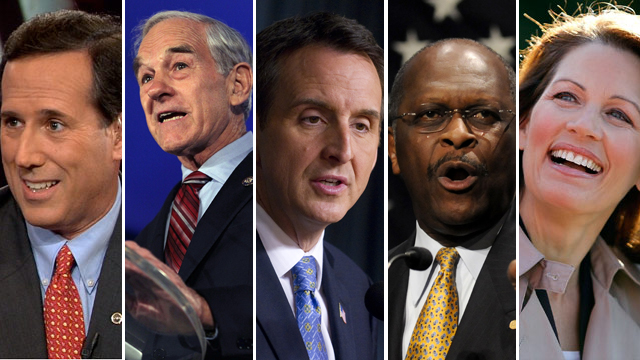 (CNN) - In a presidential race thus far centered on the economy, nearly half of the 2012 GOP field took a break Friday to turn the election's spotlight on abortion.

Five candidates appeared–in person or via Skype–at the National Right to Life convention in Jacksonville, Fla., where they tapped into a social conservative base that's largely been sidelined since the tea party movement shifted the GOP's focus to fiscal issues.

All the candidates agreed life begins at conception and punctuated their point by citing the Declaration of Independence, which states all men "are endowed by their Creator with certain unalienable rights, that among these are life, liberty and the pursuit of happiness."

Several speeches were also laced with faith-based remarks. Herman Cain, former CEO of Godfather's Pizza, warned the country was in a "moral crisis" and said an increasingly secular culture was to blame for the legalization of abortion.

"As believers, most of us, we've got to fight back strongly with our voices and our votes," Cain said.

Former Pennsylvania Sen. Rick Santorum underscored abortion as a rights issue, saying the government was ignoring the rights of the unborn and used the opportunity to tie in "Obamacare" as evidence the president was "fixated on accumulating power in DC."

Rep. Ron Paul from Texas, a former obstetrician who says he's delivered more than 4,000 babies, said he would introduce legislation called "We the People Act," which would shift abortion laws from the federal level to the states.

"We could prevent millions of abortions by allowing states to legislate," Paul said, via Skype.

The libertarian-leaning congressman said the issue of life and abortion is "probably the most important issue of our age" and that "liberty is secondary to life."

While the previous three candidates delivered sermon-like speeches with emotional rhetoric, Rep. Michele Bachmann and former Minnesota Gov. Tim Pawlenty kept their messages short and on point about the election.

Bachmann, who has five children and fostered 23 others, tried to emphasize she was the candidate with the strongest record fighting abortion.

"What you want in a president is someone who is unquestionably 100 percent pro-life," Bachmann said, adding a line she has repeated throughout her campaign: "I need your help to seek the office of the presidency to make Obama a one term president."

Former Minnesota Gov. Tim Pawlenty had the shortest speech of all the candidates. He cited an article from National Review Online, a conservative news outlet, which described Pawlenty as the most pro-life candidate in the current GOP presidential field.

Interestingly, none of the candidates referred to a controversial move earlier in the week by former Govs. Mitt Romney and Jon Huntsman, both of whom passed on signing a pledge against federal funding for abortion services drawn up by the Susan B. Anthony List, a pro-life organization.