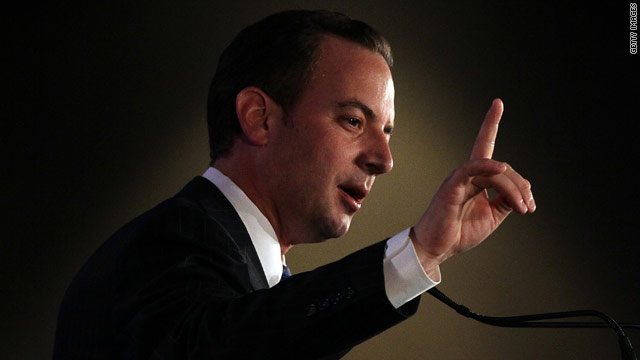 (CNN)-Republicans staked claim to the state of Pennsylvania Friday as President Obama made his ninth visit to the battleground state since he announced his re-election campaign in early April.

The President spent Thursday night in Pittsburgh and made remarks at a robotics facility Friday morning. The state should be friendly territory for the President, since he won Pennsylvania during the 2008 election, but Republican National Committee Chair Reince Priebus used a Friday conference call with reporters to suggest otherwise.

The chairman commended GOP Gov. Tom Corbett for doing "an amazing job" in the state, but decried the impact of the Obama administration.

"He can only do so much when President Obama's extreme policies are raining down all over Pennsylvania and America," Priebus said.

"Pennsylvanians already know they can't afford another year with Obama."

Rob Gleason, chair of the Pennsylvania Republican Party agreed, slamming the president for "unpopular" and "failed" policies on employment.

"President Obama is returning to Pittsburgh to talk about jobs and the economy once again," he stated.

But, the chairman declared, "The only job he cares about is his own."

The president is traveling to Pittsburgh to stoke the main point of Gleason's criticism: jobs.

Obama visited the National Robotics Engineering Center at Carnegie Mellon, the site of his visit last year, to launch a "national effort to bring together industry, universities, and the federal government to invest in the emerging technologies that will create high quality manufacturing jobs" and "enhance global competitiveness," according to a statement from the White House.

But the GOP leaders doubted that effort will translate into votes for the incumbent president.

Gleason claimed the president's actions have turned against him because his "failed policies" have created "a coalition of Republicans, Democrats and independents" that will mobilize for 2012.

In a rallying cry that echoed Priebus who vowed,"Republicans will win Pennsylvania in 2012 and make President Obama a one-term president," Gleason said, "We're almost red and we're going to finish it off this year."

According to a Quinnipiac poll released in early June, Pennsylvania residents are split on how the president is handling his job. Forty-eight percent said they approved of how Obama is handling his White House duties, but the same amount disapproved.