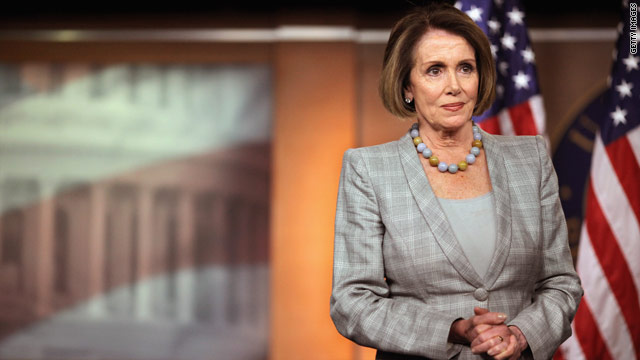 Washington (CNN) – House Minority Leader Nancy Pelosi, D-California, said Friday that history has shown that tax cuts produce deficits, not jobs, and questioned the patriotism of those at the receiving end of generous corporate tax breaks.

"All this talk about tax cuts. The – in the Bush years the Republicans said that tax cuts will produce jobs. They didn't. They produced a deficit," Pelosi told CNN Chief Political Correspondent Candy Crowley.

"What are these people not patriotic?" Pelosi continued.

"They want their special interest tax cuts, and they don't want to pay for the war in Iraq to protect our great country and our freedom," Pelosi said in an interview set to air Sunday on CNN's State of the Union.

Pelosi spokesman Drew Hammill later clarified that she “was referring to those who do not pay their fair share of taxes - like Big Oil with their billions in tax breaks as well as companies who receive tax breaks to ship jobs overseas."

Taxes have become a major sticking point between Democrats and Republicans in the negotiations to raise the debt ceiling, which Treasury Department officials have said the federal government is set to reach on August 2.

House Majority Leader Eric Cantor, R-Virginia, withdrew from the negotiations Thursday, saying Republicans had reached an impasse with Democrats over the issue of raising taxes.

Democrats have called for removing special tax subsidies for corporations, arguing that any effort to reduce the deficit will be moot without a significant increase in revenue. But Republicans have balked at the proposal, which they say will harm an already struggling economy.

"There is not support in the House for a tax increase, and I don't believe now is the time to raise taxes in light of our current economic situation," Cantor said. "Regardless of the progress that has been made, the tax issue must be resolved before discussions can continue."

Biden has thus far been spearheading the negotiations on behalf of the administration.