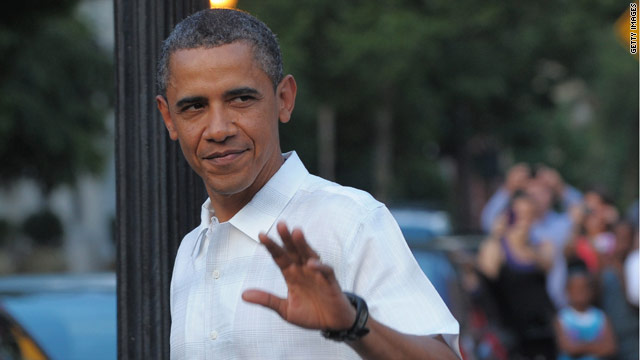 Obama kicked off his evening at the LGBT Leadership Council gala at the Sheraton Hotel in midtown Manhattan. After condemning discrimination based on a person's sexual orientation or gender identity, the president drew rigorous applause when he addressed same-sex couples.

"I believe that gay couples deserve the same legal rights as every couple in this country," Obama said.

The president, who during the 2008 campaign said he wouldn't promote same-sex marriage but did support civil unions, did not use the word "marriage" in his speech. His speech came amid some frustration that Obama, even given his efforts to rescind the military's "don't ask, don't tell" policy prohibiting gays from serving openly, has not gone far or fast enough in backing gay rights.

In his speech, Obama acknowledged that the "change" he'd promised wouldn't be easy, nor would it always be quick.

"I did not run for president to do easy things," he said. "It was time for us to do hard things, the big things, even if it was going to take time."

About 600 people paid $1,250 apiece to attend the event. They included Jane Lynch of "Glee" and the night's master of ceremonies, Neil Patrick Harris of "How I Met Your Mother."

Before the event, the Republican National Committee jabbed at Harris' show, putting out an e-mail titled "Legen – Wait for it," which is a blog for updates on "How I Met Your Mother." The e-mail went on to say "Obama heads to the Big Apple for a round of celebrity-studded fundraisers while Americans are desperate for economic leadership from the president."

The third fundraiser for Obama was a performance of "Sister Act" at the Broadway Theater, for hundreds of guests, including actor Whoopi Goldberg. Tickets for the performance started at $100 per person.

Earlier Thursday, in a release ahead of the president's fundraisers, RNC spokesman Ryan Tronovitch said that "while President Obama tries to escape the pressures of his failed economic policies with a fundraiser in New York, millions remain out of work and are beginning to realize that the only job our president is concerned about is his own."

The Democratic National Committee was quick to respond.

"Republicans are getting hammered in their districts from coast-to-coast for embracing a plan that kicks seniors to the curb by ending Medicare and because they have not presented a single idea in the past six months to create jobs. Republicans would fare better if they spent more time working to find solutions to the nation's problems rather than engaging in typical, cheap Washington political tricks," DNC Communications Director Brad Woodhouse said in a statement to CNN.

The money raised from the fundraisers will go to the Obama Victory Fund, with the proceeds shared by the president's re-election campaign and the Democratic National Committee.

This is the second night this week Obama has headlined fundraisers. He was the main attraction at two fundraisers at the Mandarin Oriental Hotel in the nation's capital Monday. Vice President Joe Biden headlined a fundraiser in Chicago on Tuesday.

Democratic sources said the Obama Victory Fund hopes to bring in $60 million by the end of the second quarter, which comes to a close at the end of the month. Most people remember that Obama shattered all records by raising nearly $750 million in his bid for the White House in 2008, but what isn't as well known is that he brought in $59 million for his presidential campaign during the first half of 2007.