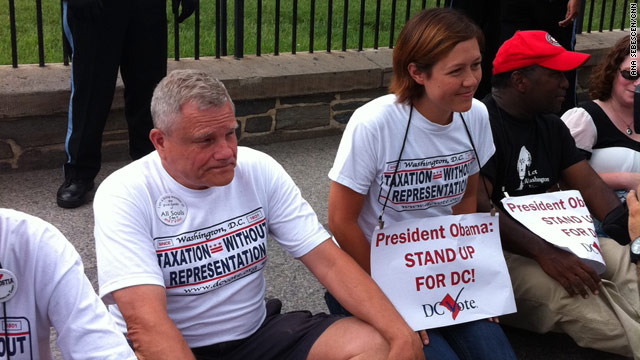 Washington (CNN) - Activists advocating congressional representation for the District of Columbia had a clear message at a rally Saturday in Washington: "President Obama, stand up for D.C."

Several hundred residents gathered Saturday morning at a rally organized by D.C. Vote, a voting-rights organization. The rally was a response to legislative moves by the U.S. House of Representatives to restrict the city's use of local tax revenue, demanding the right for representation in Congress and fighting for the right to statehood.

The District's nonvoting delegate to Congress, Democrat Eleanor Holmes Norton, and Mayor Vincent Gray, a Democrat, spoke at the rally, firing up the crowd that gathered at Lafayette Park near the White House.

"We are forced to defend the simple right of every American and of every local jurisdiction to pass our own laws and especially to spend any funds we raise in this city in any darn way we choose," Norton said.

Gray, who was arrested on April 11 near the U.S. Capitol at another protest, called for an end to congressional control of the nation's capital, urging people to stand up for their rights.

U.S. Park Police arrested 12 activists who violated laws against protesting in front of the White House. District resident Tracy Loh, 29, was one of them.

"I put my body and my life on the line," Loh said. "I would give up anything to bring statehood to the District of Columbia within my lifetime."

Abigail Jacobs, originally from Alabama, welcomed the protesters' call for congressional representation, but rejected the idea of statehood for the District of Columbia.

"I do believe that they need representation for the things that are going on, on the Hill, but other than that, them being a state is something that shouldn't happen because our Founding Fathers didn't want them as a state for a reason," she said.