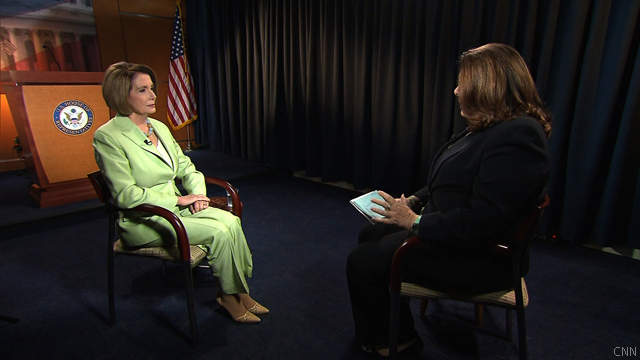 (CNN) - Highlights from "State of the Union":

Rep. Mike Rogers (R-Michigan) on CNN's "State of the Union":
In this political mess, well I've got a 2012 campaign, which unfortunately I think this was more written by the political shop than it was by the Pentagon… I think it's very hard to come to any other conclusion when the time line is exactly in line with the 2012 election, with the commanders on the ground saying don't do this.

Click to watch video
Rep. Mike Rogers (R-Michigan) on CNN's "State of the Union":
By announcing it now right in the middle of that first fighting season, I think we have done more harm to our ability to leave Afghanistan a place that can defend itself. And at the end of the day, that is the goal, that their police, that their army can deal with the Taliban once we leave.

Rep. Mike Rogers (R-Michigan) on CNN's "State of the Union" on Libya:
This should be one of the most embarrassing moments for this administration going into the week, the fact that they had Republicans and Democrats all over the map on something that I believe if the president has shown leadership, presented his case, and I believe that there are national security interests in Libya and in a very limited, defined role, there are things that we better be concerned about.

Rep. Nancy Pelosi (D-Minority Leader) on CNN's "State of the Union" on Afghanistan:
President Obama has a plan. He has announced the good news that we will be gone by a date certain. He has – I had hoped that they could take more troops out sooner for a number of reasons. The lives and limbs of our precious treasure, first and foremost - the cost to the taxpayer. But also the message to the Afghan people, the Afghan government that they have to do their part of this. And the sooner the better… he now has a plan for Afghanistan. Yes- No, I would have hoped that we would have had a way to bring our troops home sooner. But that depends on actions taken by the Afghanis as well. I think we sent them a clear message.

Rep. Nancy Pelosi (D-Minority Leader) on CNN's "State of the Union", on reaching an agreement on the debt ceiling:
There won't be any agreement for such an agreement, unless the House Democrats are part of that. Unless the speaker comes to the table with 218 votes… leader Cantor can't handle the truth when it comes to these tax subsidies for big oil, for corporations sending jobs overseas, for giving tax breaks to the wealthiest people in our country. While they're asking seniors to pay more for less. To be on – as they abolish Medicare.

Rep. Nancy Pelosi (D-Minority Leader) on CNN's "State of the Union":
CROWLEY: Would you vote for a debt ceiling that has attached to it a package that contains only spending cuts?
PELOSI: I – that would be very hard to – what would it accomplish? How much deficit reduction could you achieve? You cannot achieve what you set out to do if you say it's just about cutting. It has to be about increasing the revenue stream as well… in the Bush years the Republicans said that tax cuts will produce jobs. They didn't. They produced a deficit. They produced a deficit.
CROWLEY: Along with two wars, and...
PELOSI: Two wars. Two unpaid for wars. What, are these people not patriotic? They want their special interest tax cuts, and they don't want to pay for the war in Iraq to protect our great country and our freedom.

Sen. Jim DeMint (R-South Carolina) on CNN's "State of the Union":
CROWLEY: And you have said that if there are Republican senators up for reelection next year who vote for an increase in this debt ceiling without these things that you've outlined, the cut, cap, and balance, you might go ahead and - and back a primary opponent to them that would. You're talking about Senator Lugar, Senator Snowe, Senator Brown. Would you consider - if they went ahead and said we've got to raise this debt ceiling, you would consider running an opponent against them in a primary?
DEMINT: I have no plans to work against any incumbent Republicans. There are 23 Democrats I - and I'm going to be involved in those races…
CROWLEY: But you would not field race - field candidates against Lugar, Brown, Snowe?
DEMINT: I have no plans to recruit candidates against any of our incumbents.
CROWLEY: That's not exactly a definite no.
DEMINT: I'm not real definite.
CROWLEY: OK.

Sen. Jim DeMint (R-South Carolina) on CNN's "State of the Union":
CROWLEY: Looking at the 2012 race now, are there any people in the race now, officially in the race now, that you absolutely could not support? One of the things I'm thinking is Jon Huntsman just got in. We asked him - he was asked about this pledge and he said, you know, the only pledge I really do is "The Pledge of Allegiance".
DEMINT: Yeah. Well, I won't support any candidate who does not support balancing the budget.
CROWLEY: So Huntsman is out?
DEMINT: So for me, he's out.

Getting to a deal which will allow an increase in the U.S. debt limit was a key topic on the Sunday shows. After weeks of trying to find a common approach to bringing down the nation's huge debt, Republicans and Democrats don't even agree on terminology:

Sen. Mitch McConnell (R-Minority Leader) on ABC's "This Week":
"Throwing more tax revenue into the mix is simply not going to produce a desirable result, and it won't pass. I mean, putting aside the fact that Republicans don't like to raise taxes, Democrats don't like to either."

Rep. James Clyburn (D-South Carolina) on ABC's "This Week":
"We do not want to raise anybody's tax rates–that's never been on the table and I wish they would get beyond their talking points and get honest with the American people as to what these discussions are about. We ought not have these oil subsidies, we ought not have these ethanol subsidies, we ought not have all of these new breaks for millionaires and billionaires. We ought to be honest with the American people and have an effective tax rate that would be fair to everybody."

The President jumps into the morass this week beginning with meetings with Senate leaders. New Jersey Governor Chris Christie… a Republican fave… thinks in the end, the answer lies in the triangle between the President, the Senate Democratic Leader and the Republican House Speaker…with everybody ceding some territory:

Gov. Chris Christie (R-New Jersey) on NBC's "Meet the Press":
"The president has to get involved personally. What I found in our experience in New Jersey in dealing with what you just talked about is there is no substitute for having the three leaders in the room having to look at each other, having to hash this out. And everybody has to put skin in the game."

On the eve of her presidential announcement party in Iowa, Congresswoman and Tea Party heroine Michele Bachmann says she's pleased with a new Iowa poll showing her statistically tied for first with former Massachusetts Governor Mitt Romney… no coincidence she used her Sunday platform to take a swipe at him for his views on abortion:

Rep. Michele Bachmann (R-Minnesota) on "Fox News Sunday":
BACHMANN: Governor Romney has had a history of varying his position on this issue. I think clearly we need a candidate who is pro-life that's reflective of our party. It's reflective of my position -
WALLACE: And Mitt Romney is not?
BACHMANN: Mitt Romney has to say what he is but I will say that if he is saying now that he is pro-life, this was a tremendous opportunity for him to demonstrate that by signing the Susan B. Anthony pledge and I think it's disappointing that he didn't.