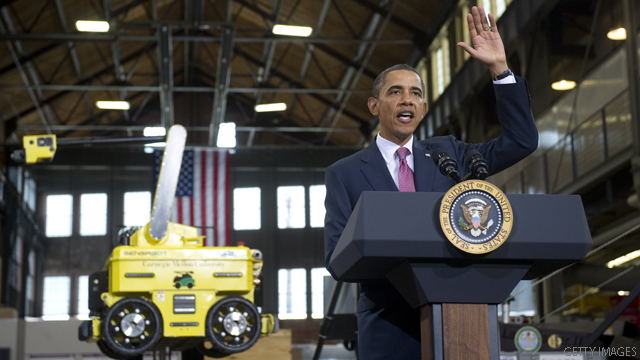 Washington (CNN) – It's not every day that a presidential trip takes a back seat to another political story in the state he's visiting.

But that may be the case for President Obama Tuesday, as he visits a manufacturing plant in battleground Iowa.

That's because on the same day he is touting the economy in Bettendorf, Sarah Palin will be 152 miles to the west, touting the flattering new movie about her political career.

Palin will also be competing for Iowa headlines with fellow tea party favorite Rep. Michele Bachmann of Minnesota, who Monday officially kicks off her campaign in her hometown of Waterloo.

Also looking for a little of the political oxygen there Tuesday: Rep. Ron Paul of Texas who meets with voters in Des Moines and former Sen. Rick Santorum of Pennsylvania who makes four stops on the other side of the state.

The Republicans of course have their eyes on the February caucuses, while President Obama is looking toward next fall's electoral map. Obama knows a bit about the importance of hitting Iowa early and often. He parlayed frequent visits in 2007 to an upset win over then-favorite Hillary Clinton in the 2008 caucuses.

Obama then captured the purple state's seven electoral votes with an easy win over Sen. John McCain in the general election.

That's what brings President Obama back to the state this week. While Republican candidates hammer him on the economy - former House Speaker Newt Gingrich in Iowa on Saturday repeated his oft-used line on the Obama "depression" - the White House will look to rally support on his policies.

Obama will visit the Alcoa Davenport Works plant before delivering a speech on manufacturing and the economy. He will point to the plant that employs more than 2,000 workers as a success story.

The Quad Cities Times reported the plant has returned to the number of employees it had before the recession. The paper noted the plant has been buoyed by its parent company's new deal with Airbus. And the Times said the area has since had its first drop in unemployment numbers in two years.

That's in contrast to national numbers that have been the focus of the GOP candidates. Obama may not be the competition for the field in the Iowa Caucuses, but he is certainly at the center of their message.

On the eve of her announcement, Bachmann foreshadowed her themes in Sunday morning show interviews saying, "the country is on the wrong track. My goal is to turn the economy around and have jobs created."

Whether Palin becomes part of that field of course is still a mystery. She surprised many by deciding to attend the Tuesday premiere of her movie in Pella, Iowa. Like her bus tour around Memorial Day, it is stoking speculation about her intentions, with smart political observers admitting they just don't know how to read these tea leaves.

Candidate or not, Palin will draw heavy media attention and pull the political spotlight to the Opera House where the movie will be shown.

The trappings of the presidency like shiny Air Force One touching down in the state and the president trying to turn the tables on questions over the economy will find some tough competition for the news cycle.