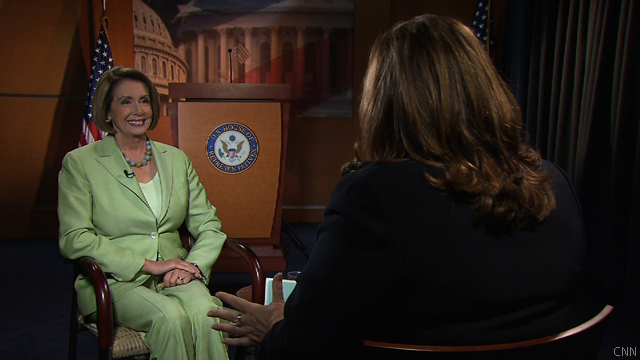 Washington (CNN) - House Minority Leader Nancy Pelosi framed her campaign argument against Republicans ahead of the 2012 elections, predicting the GOP will be blamed for the high unemployment rate.

"When the … unemployment rate is high, it's hard for the incumbent to win," Pelosi said in an interview with CNN Chief Political Correspondent Candy Crowley. "I remind you though, we're not the incumbent. The Republicans are the incumbent."

Republicans won control of the House in the 2010 midterm elections, later passing a budget proposed by Budget Committee Chairman Rep. Paul Ryan of Wisconsin. Although the plan has no chance of passing through the Democratic-controlled Senate, Pelosi said it reflects GOP values and priorities by proposing deep spending cuts while trimming future benefits for senior citizens.

The California Democrat urged the electorate to give Republicans credit for the Ryan budget plan, questioning its proposals on Medicare and Republican positions on Social Security.

"Their budget is the gift that keeps on giving, sadly. Politically it does, sadly for the American people. It's a bitter pill," Pelosi said. "They vote where they believe. And they do not believe in Medicare and Social Security."