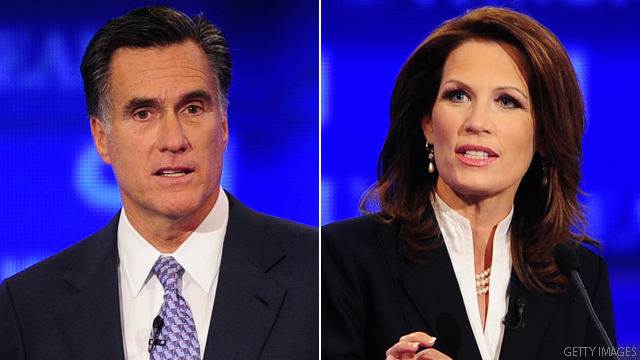 (CNN) - Mitt Romney and Michele Bachmann lead a new poll of caucus goers in the first-in-the-nation caucus state of Iowa.

The Des Moines Register Iowa Poll released Saturday night showed former Massachusetts Gov. Romney, a familiar face from his 2008 bid, with 23 percent followed by Congresswoman Bachmann of Minnesota, who will officially kick off her campaign in Iowa Monday, with 22 percent.

Former Minnesota Gov. Tim Pawlenty, who has made over 20 visits to the Hawkeye State and ran the first TV ad of the 2012 election there last week, received 6 percent, followed by former Sen. Rick Santorum of Pennsylvania, also a frequent visitor to the state, with 4 percent and former Utah governor and former U.S. ambassador to China Jon Huntsman with 2 percent.

The Iowa caucuses are scheduled for February 6 and have the potential to propel a candidacy. However, given the largely socially conservative electorate, some candidates hoping to capture the White House, including Romney and Huntsman, are focusing their energy on other early voting states.

But for candidates popular with social conservatives, the new poll was welcome news. Bachmann, an Iowa native, said Sunday her team is "thrilled" with the results.

"We don't take this for granted. This reflects what we had been hearing on the ground," Bachmann said. "So this will be the beginning of a marathon. It's not a sprint and so we're looking forward to go and to greet more people and to win in Iowa."

The poll surveyed 400 likely Republican caucus-goers June 19 through June 22 with a sampling error of plus or minus 4.9 percentage points.