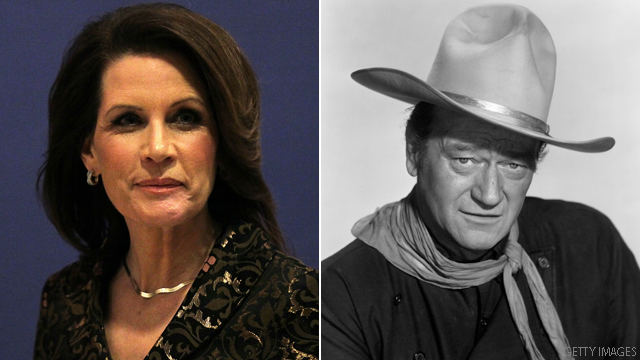 (CNN) - On the eve of her official presidential announcement, GOP presidential candidate Michele Bachmann incorrectly identified movie star John Wayne's origins in an attempt to draw a parallel between her and the American icon.

"I want them to know just like John Wayne is from Waterloo Iowa, that's the spirit I have too," Bachmann said Sunday on Fox News. "It's embracing America. It's sacrificing for America."

John Wayne the movie star was born in Winterset, Iowa, which is approximately three hours Southwest of Waterloo, Iowa, Bachmann's native city and the site of her presidential announcement Monday. But according to the Waterloo Chamber of Commerce, the actor's parents did live in the city at one point.

However, it was a different John Wayne that caused the misstep to go viral on the internet.

Serial killer John Wayne Gacy was born in Chicago, Illinois and later lived and worked in Waterloo where he was convicted of sodomy and sentenced to prison. Gacy, known as "the clown killer" was found guilty of 33 murders in the Chicago area in 1980 and died by lethal injection in 1994.

Bachman's campaign did not immediately respond to a request for comment.