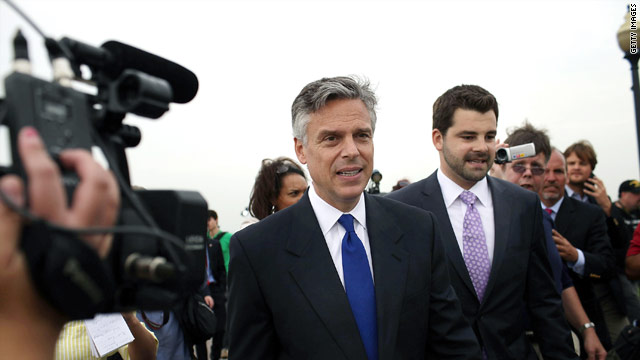 Washington (CNN) – Jon Huntsman's presidential campaign is firing back at a top aide to Republican rival Tim Pawlenty who suggested Monday that Huntsman's skepticism about the ongoing U.S. mission in Afghanistan is "isolationist."

In a Monday appearance on MSNBC, Pawlenty senior adviser Phil Musser previewed a "major" foreign policy speech that the former Minnesota governor is slated to deliver tomorrow at the Council on Foreign Relations in New York.

Musser said Pawlenty plans to "push back the isolationist strand that we are seeing in Republican Party," a remark that appeared to be aimed, in part, at Huntsman's call for swift troop reductions in Afghanistan.

Miller said Huntsman favors a rapid troop drawdown from Afghanistan but also wants to keep a strong counter-terrorism and intelligence operation in place proportionate to the threat.

"Aggressive world-wide counter-terror efforts and commitment to broad expansion of free trade agreements while ending costly long-term entanglements that have no endgame is not isolationism," Miller told CNN.

"Jon Huntsman has the experience to enact foreign policy that both protects our core national security interests and responsibly deploys those in our armed forces to whom we owe so much," he added.