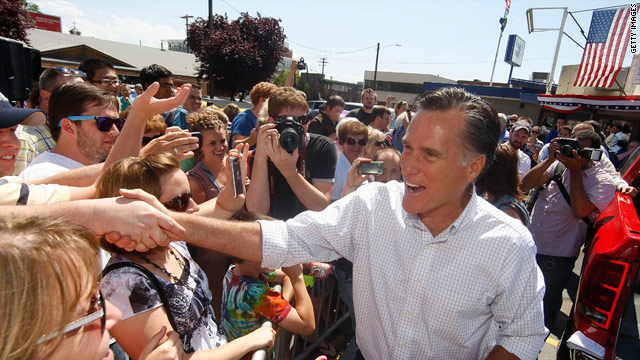 Washington (CNN) – After again hammering Barack Obama for his handling of the economy, former Massachusetts Gov. Mitt Romney did have one compliment Monday as the financial expectations game goes into high gear.

"The president will raise an astronomical amount of money, and what we have to do is raise enough money to get our message out," Romney told reporters after several stops in New Hampshire.

As the key second quarter for campaign fund-raising ends Thursday, many of the Republican hopefuls are urgently trying to bring in enough money to impress donors and the political world.

While he has been holding fund-raising events around the country – including bringing in $10 million in one day in Las Vegas – Romney and his team tried to downplay expectations. Romney has a strong fund-raising network intact from his first run in 2008 and has worked hard to win support among the donor community.

"We are going to have sufficient funds to take our message to the people and the primaries. I don't know if we will outpace others. These are leaner times," Romney told reporters.

A campaign official told CNN its second-quarter total haul is expected to be less than $20 million although some outside experts have predicted it will be higher. While he loaned his campaign just over $2 million in the second quarter of 2007, he is not expected to do that this time, the aide told CNN.

Romney, who has more fund-raising events this week, said he has gone to places where the real estate market has been hit hard and therefore people in related industries have not been able to open up their wallets or are giving less than they did last election.

"That is why we are running a leaner campaign than last time," he said.

Romney is already looking ahead to the next quarter and has scheduled a fundraiser in London early next month.

Regarding Rep. Michele Bachmann, who criticized him over the weekend regarding his stance on abortion, Romney chose the high road when he was asked about her entering the race.

"I think she is a very strong contender. She is an excellent candidate. She is getting her message across and receiving good support. I have nothing but respect for her."

When a reporter pressed whether he thought Bachmann may be too polarizing, Romney would only say, "Every candidate should have positions that some people agree with and others don't agree with. …

"I can only say congratulations to her for the traction that she is getting."

A Des Moines Register poll released this weekend showed Romney leading the field of Republican candidates with Bachmann right behind him.