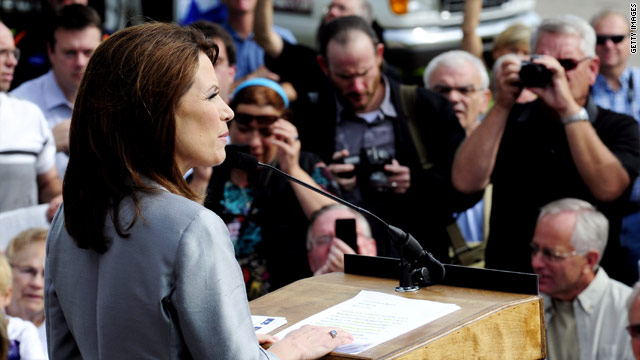 Myrtle Beach, South Carolina (CNN) - Minnesota Rep. Michele Bachmann’s debut in South Carolina as a presidential candidate drew what was unquestionably the largest crowd of the political season to date in the key early primary state.

If enthusiasm alone wins elections, Bachmann might not have much to worry about in the coming months.

Bachmann was a late arrival to the rally, held outside an aquarium in Myrtle Beach, after flying in from a morning stop in New Hampshire. But her tardiness did little to dampen the enthusiasm of the crowd.

She stepped off a brand-new campaign bus to find an audience peppered with supporters waving Gadsden flags and other emblems of the Tea Party movement.

“The disaster that began four years ago will end right here, November 6, 2012,” Bachmann said, vowing to make President Barack Obama a one-term president. It was the first of several red-meat one-liners.

Bachmann said she plans to win decisive early victories in Iowa, New Hampshire and South Carolina on her way to the White House. She promised to follow that with a national campaign – even in the heavily Democratic state of Hawaii.

“We want to win Hawaii,” she said. “And we think that there is a certain Hawaiian president who should go back to Hawaii!”

Pacing a small dais with her husband Marcus at her side, Bachmann rattled off a familiar list of criticisms against “Obamacare” and other regulations coming out of Washington.

She pointed specifically to the National Labor Relations Board complaint against Boeing, which is trying to open a new plant in North Charleston, as an example of how the Obama administration does not understand job creation.

The crowd jeered when she recounted recent House testimony from Treasury Secretary Tim Geithner, accusing him of wanting to hike taxes on small businesses in order to maintain the size of government programs.

Citing her experience as a “former federal tax lawyer,” she said she understands the “the devastation of high taxes” on small businesses.

Several South Carolina voters told CNN before and after the speech that while they had not yet picked a candidate, Bachmann was already a favorite thanks to her charisma and unabashed conservatism.

“I think it’s time for a woman to get into office,” said Carmine Greco, a retiree originally from New York. “She is right with the people. She is authentic. She is sincere in what she says.”

Tim Jacobson, who manages an OfficeMax in Myrtle Beach, said he is choosing between Bachmann, Romney and businessman Herman Cain. He said he might like to see a Romney-Bachmann ticket.

“I think Michele brings so much energy to the ticket and Romney has huge business experience,” he said. “They could balance each other out.”

South Carolina state Rep. Thad Viers, an ally of Gov. Nikki Haley in the state legislature, introduced Bachmann at the rally and later said he was likely to endorse her presidential bid.

“I am a Tea Party candidate and none of the candidates right now are Tea Party,” Viers told CNN. “She is the only one who walks the walk and talks the talk.”

After the event, Bachmann told reporters that she would not be distracted by the media’s focus on some of her recent verbal miscues, like her mistaken claim Monday that actor John Wayne was from Waterloo, Iowa.

“I think that it just goes with territory,” she said of the media attention. “I think you need to be ready with what the media brings.”

Bachmann has four more stops planned across in South Carolina, culminating with a town hall in Rock Hill on Wednesday.