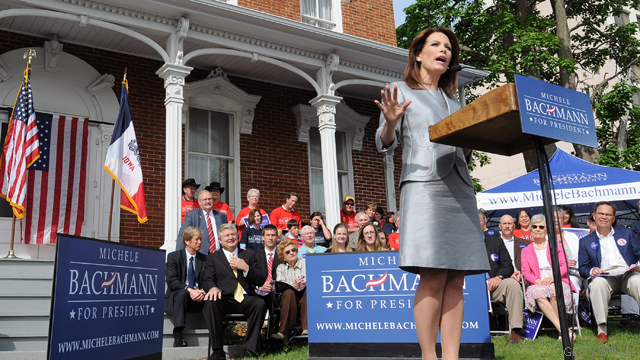 “People can make mistakes and I wish I could be perfect every time I say something, but I can’t,” Bachmann said on CNN’s “American Morning.” “But one thing people know about me is that I’m a substantive, serious person and I have a strong background.”

Click to watch video
The Minnesota congresswoman addressed her most recent slip up when she incorrectly said movie star John Wayne was born in Waterloo, Iowa, Bachmann's native city and the site of her presidential announcement Monday. Wayne was born in nearby Winterset.

“John Wayne’s parents first home was in Waterloo, Iowa and he was from Iowa and of course the main point I was making are the sensibilities of John Wayne, which is patriotism, love of country, standing up for our nation, that positive enthusiasm is what America’s all about,” Bachmann said. “And that’s of course my main point.”

When asked if it is harder to prove herself because of her gender, the three term representative said “people just need to know what a person’s background is.”

“I'm introducing myself now to the American people so that they can know that I have a strong academic scholarly background, more important I have a real life background,” Bachmann said.