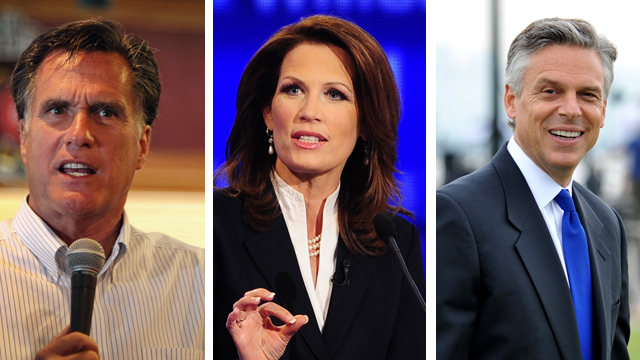 (CNN) - The coalition of conservative groups behind the "Cut, Cap and Balance" pledge to oppose a debt ceiling hike without major spending cuts and a balanced budget amendment is pressuring Republican presidential candidates Mitt Romney, Michele Bachmann and Jon Huntsman to get on board.

Huntsman, the former Utah governor, has already said he does not plan to sign the pledge, which has the backing of more than 150 tea party and conservative groups. A dozen Republican senators and 20 House members are also on board.

One of those senators, South Carolina's Jim DeMint, told CNN over the weekend that the pledge is a litmus test for his support said he has ruled out backing Huntsman's bid as a result.

Romney and Bachmann have not yet said whether they will sign the pledge.

"All presidential candidates should sign the 'Cut, Cap, and Balance' pledge or risk sending a message to the American people that they are not serious about putting our fiscal house in order," said Chris Chocola, president of the anti-tax Club for Growth.

The "Cut, Cap and Balance" pledge demands that Congress not raise the debt ceiling unless it passes "substantial" budget cuts and spending caps along with a balanced budget amendment to the U.S. Constitution.

Its supporters are also asking President Barack Obama to sign the pledge, but that seems unlikely.