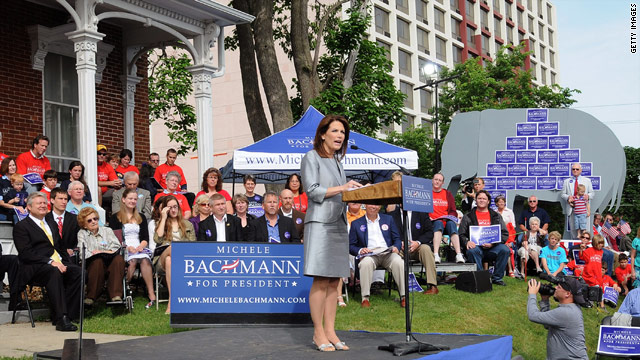 (CNN) – Rep. Michele Bachmann's former chief of staff doesn't think the newly declared presidential candidate is ready for the White House, but he issued an endorsement of Tim Pawlenty Tuesday.

In an op-ed in the Des Moines Register, Ron Carey said the Minnesota representative lacks "the judgment, the demeanor, and the readiness" of former Minnesota Gov. Pawlenty.

Carey, the former chairman of the Minnesota Republican Party, resigned as Bachmann's chief of staff in July 2010 and said that experience led him to now back Pawlenty.

Carey's comments in the Iowa paper came the day after Bachmann's official campaign announcement in her native Waterloo.

Her former top adviser said he agrees with Bachmann and Pawlenty on most of the issues "but the similarities end here."

"I know Tim Pawlenty very well. He is a family man filled with faith and conservative convictions proven in action. He will make a great president," Carey wrote. "I know Michele Bachmann very well. She is a faithful conservative with great oratory skills, but without any leadership experience or real results from her years in office. She is not prepared to assume the White House in 2013."

Team Bachmann did not immediately respond to a request for comment, but in an interview Tuesday Bachmann said she expects the negative stories.

"There will be a media onslaught on attack, but that's nothing new," she said on NBC's "Today." "That is something that goes with the territory. It doesn't matter who the candidate is, whether they're male or female, there's simply attacks that will come."