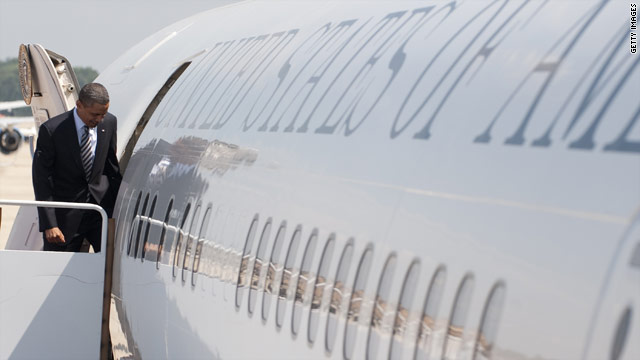 President Barack Obama boards Air Force One prior to departure from Andrews Air Force Base in Maryland, June 28, 2011. Obama is traveling to speak on the economy in Bettendorf, Iowa.
June 28th, 2011
12:45 PM ET

Iowa finally in the spotlight

Bettendorf, Iowa (CNN)- President Obama visits a factory in Bettendorf. Sarah Palin attends a movie premiere in Pella. Iowans will go to bed with their political bellies full on this day.

A couple of months ago, those bellies were growling. Iowa's notoriously impatient political class was complaining loudly that candidates in the 2012 field were giving this crucial early voting state the cold shoulder.

Even the state's Republican governor was warning the candidates better get out here. And many of the GOP contenders have done just that. Now it's the President's turn.

Both the White House and the President's reelection campaign insist Obama's trip to an Alcoa factory just off the Mississippi River is strictly an official visit.

In a conference call with reporters, an administration official cautioned the President is "going to really focus his visit on growth of manufacturing."

But Iowa is clearly not far from the President's mind. After all, this is where Mr. Obama pulled off his upset win in the 2008 Iowa Caucuses in what later became a bruising nomination battle against Hillary Clinton.

"Iowa is clearly a special place for the president," added Jen Psaki, Deputy White House Communications Director on the conference call. "He spent a significant amount of time there and really got to know many people across the state very well when he was running."

"It certainly is suspicious. I think there's a famous saying that no politician comes to Iowa by accident," Straw said in an RNC conference call with reporters.

"Almost all of his visits are political," Priebus added.

The White House will let the pictures from the Alcoa factory visit do much of the political talking for the President. For its backdrop, the administration has chosen a plant that is hiring workers in a state that enjoys a low six percent unemployment rate.

Iowa will likely be a key midwestern battleground in the upcoming general election. Mr. Obama won the state by nine points in 2008. But President Bush barely eeked out a victory Iowa in his reelection bid in 2004.

The President is sharing a crowded political stage in Iowa. Later in the evening, Sarah Palin will attend the premiere of a movie that was made to "reintroduce" the former Alaska Governor to voters.

Steve Bannon, the director of the pro-Palin film "The Undefeated," told CNN the picture is aimed at destroying what he calls the "Caribou Barbie" image of the 2008 Vice Presidential candidate.

"It's not to reinvent Sarah Palin. Governor Palin, you know, handles her own media," Bannon told CNN.

"The story I thought was what I call 'hiding in plain daylight', hiding in plain sight was the story of her stewardship as Governor and I don't think she'd ever been introduced to the nation correctly."

Of course, Palin is not the only Republican visiting Iowa this week.

On Monday, Minnesota Republican Rep. Michele Bachmann laid into the President's economic record as she launched her campaign near her birthplace in Waterloo, Iowa.