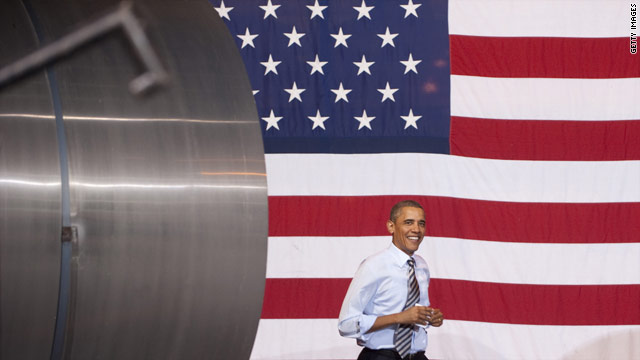 Bettendorf, Iowa (CNN) - The music was definitely "Hail to the Chief." Not the Obama '08 campaign theme song: U2's "City of Blinding Lights."

But the tune coming from the President sounded awfully familiar during a speech at the Alcoa factory in Bettendorf, Iowa Tuesday.

"I ran because I believe in an America where families aren't just treading water but moving forward," said the President in a reference to his last campaign.

The White House insists this trip was no campaign stop. An administration official called it an "official visit" designed to highlight the administration's commitment to manufacturing jobs.

Still, it was a friendly union crowd assembled inside a plant that's actually hired back all of the workers who were laid off by Alcoa in recent years. In fact, the factory is adding employees.

The President took a veiled swipe at Republicans who have streamed into this crucial early voting state to slam his economic record.

"No matter what you may hear there is no silver bullet to reverse a decade of challenges," the President said.

The President also managed to work in a meal at Ross' 24 Hour Restaurant, a burger spot that caught his attention as a candidate. Mr. Obama challenged the press to order a belt-buster called "the Volcano."

"Anybody who wants one, I will buy it," he said.

Democratic leaning workers at the factory liked seeing the President back in campaign mode.

"My fear is that what I see with the tea party and the republicans is that there is so much emphasis in taking care of companies. And you've got to have companies to have jobs. But you also have to take care of the people," said Brad Greve, an Alcoa factory worker.

Democrats remember well it was Iowa where then candidate Obama staked his long-shot bid for the White House.

In the '08 Iowa caucuses, he toppled a party icon in Hillary Clinton before going on to win the battleground state in the general election by nine points.

White House officials say it's only a coincidence that Mr. Obama's trip came just hours before Sarah Palin attended the premiere of a movie based on her life story and one day after Minnesota Rep. Michele Bachmann launched her run for 2012.

Iowa's Republican governor, Terry Branstad was on hand for the President's speech. He told CNN he caught a whiff of 2012 in the air.

"Well I think there are some political overtones here," he said.