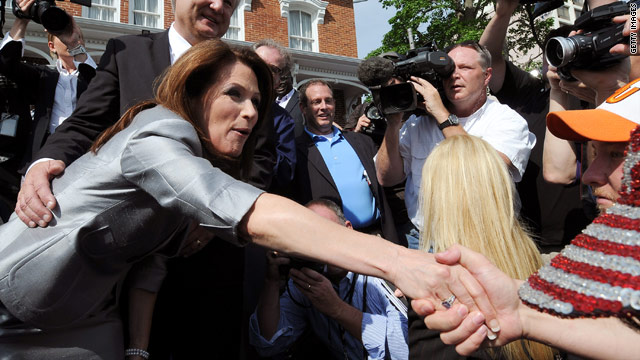 (CNN)-Minnesota Rep. Michele Bachmann's entrance into the GOP presidential pool of candidates Monday has made a splash among Republicans, according to a Gallup poll released Tuesday.

The third-term congresswoman's name recognition has risen 17 points since late February-early March to 69 percent, placing her fifth among the most well-known Republican candidates and potential contenders included in the Gallup poll.

Former Alaska Gov. Sarah Palin, former House Speaker Newt Gingrich, Mitt Romney, former governor of Massachusetts and Texas Rep. Ron Paul take the top four spots in the poll as the most recognized in the field, though Sarah Palin has not formally announced a bid for the presidency and the other candidates have.

The poll was conducted in the days leading up to Bachmann's formal announcement of her intention to seek the GOP presidential nomination in 2012 from Waterloo, Iowa. It began on the day she appeared in the CNN Presidential Primary Debate from New Hampshire -a performance that was well-received-but does not include potential impact from her most recent gaffe.

Both Bachmann and Cain enjoy a score of 24. It is the highest among the GOP field, followed by Palin at 17 and Romney at 15.

Perhaps more telling is the way the numbers move. For other candidates, such as former Utah governor Jon Huntsman, the positive intensity score has lowered, though name recognition has gone up, which indicates that his image is not improving. Positive intensity scores for Romney, Gingrich, and Paul have also declined from where they stood earlier this year, according to the poll.

Gallup's survey was conducted from June 13-26 among 1,500 Republicans and Republican-leaning independents via telephone.