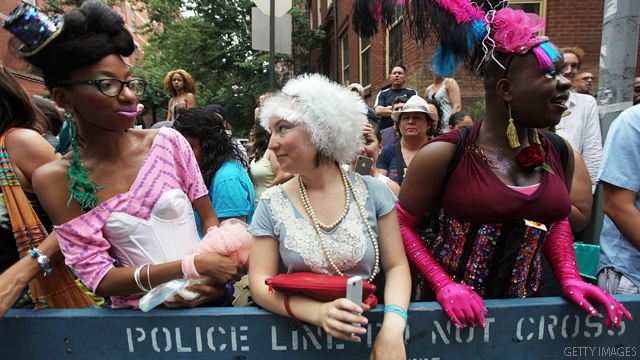 (CNN) - The majority of voters in New York supported the Empire State law allowing same-sex couples to marry, but divides existed among age groups and religious affiliation, according to a new poll.

The Quinnipiac Poll released Tuesday showed 54 percent of voters backed the measure that Democratic Gov. Andrew Cuomo signed into law Friday. Seventy percent of younger voters, or those under 35 years of age, supported the law, a number far exceeding the 57 percent support from those over 65 years of age.

When broken down by religion, Jewish voters supported the law by a greater margin than Catholic and Protestant voters. Jews supported it with 67 percent, Protestants with 54 percent and Catholics with 48 percent.

Voters who did not align themselves with a religion supported the measure with 78 percent.

Cuomo signed the measure after it passed a Republican-controlled Senate Friday night. The law will grant same-sex couples the right of inheritance, employer health benefits and a host of state tax benefits.

The survey of 1,317 voters was conducted before the legislation became law, from June 20 through June 26. The poll had a sampling error of plus or minus 2.7 percentage points.