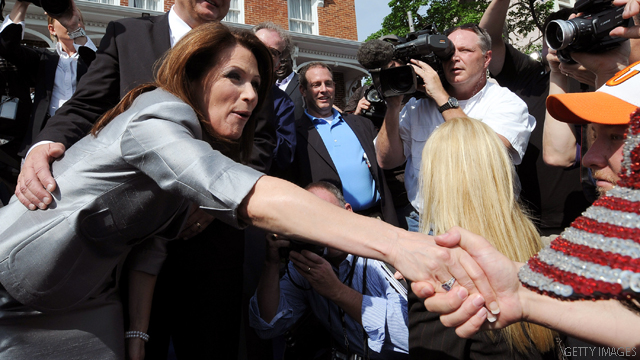 The Minnesota congresswoman announced her candidacy Monday in Iowa and has since taken her campaign to the first-in-the-nation primary state of New Hampshire.

Bachmann and former Massachusetts Gov. Romney were the only candidates to receive double digit support. Rep. Ron Paul of Texas remained steady at 8 percent, former New York City Mayor Rudy Giuliani, who is not running, received 5 percent followed by former Alaska Gov. Sarah Palin, who is considering a bid and former Utah Gov. Jon Huntsman at four percent. Huntsman jumped four points since May, when he was not an official candidate.

The survey polled 400 likely Republican presidential primary voters via telephone between June 25 and June 27, before Bachmann, Huntsman and Romney officially entered the race. The sampling error was plus or minus 4.9 percentage points.