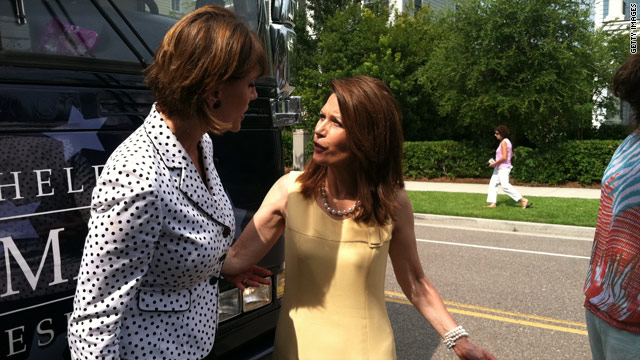 Daniel Island, South Carolina (CNN) – Presidential candidate Michele Bachmann claimed Wednesday that the media is rooting for a catfight between her and Sarah Palin.

"They want to see two girls come together and have a mud wrestling fight, and I am not going to give that to them," Bachmann told a voter Wednesday who asked about her relationship with the former Alaska governor.

The Minnesota congresswoman praised Palin and said there is room in the Republican presidential race for any candidate.

"This race is wide open and we can accommodate all the candidates who want to come in," she said.

She urged Republicans to unite behind "the ultimate goal" of defeating President Barack Obama in 2012.

"We are going to stick together and see this thing through," she said.

Bachmann's question-and-answer session in Daniel Island, a suburb of Charleston, seemed to make an impression on the more than 200 voters who showed up.

"You make me tingle Michele!," one audience member shouted.

"Live free or die!," she yelled back. "That's what they say in New Hampshire."