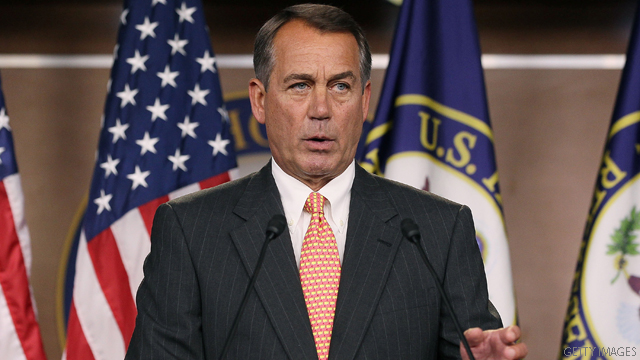 Washington (CNN) - House Speaker John Boehner responded to President Obama's press conference Wednesday saying Republicans in the House will continue to "stand with the American people" while the president ignores the economic realities in the U.S.

"The President's remarks today ignore legislative and economic reality, and demonstrate remarkable irony. His administration has been burying our kids and grandkids in new debt and offered no plan to rein in spending. Republicans have been leading and offering solutions to put the brakes on this spending binge. The President has been AWOL from that debate.

"The President is sorely mistaken if he believes a bill to raise the debt ceiling and raise taxes would pass the House. The votes simply aren't there – and they aren't going to be there, because the American people know tax hikes destroy jobs. They also know Washington has been on a spending binge for many years, and they will only tolerate a debt limit increase if we stop it.

"The new majority in the House is going to stand with the American people. A debt limit increase can only pass the House if it includes spending cuts larger than the debt limit increase; includes reforms to hold down spending in the future; and is free from tax hikes. The longer the President denies these realities, the more difficult he makes this process. If the president embraces a measure that meets these tests, he has my word that the House will act on it. Anything less cannot pass the House."