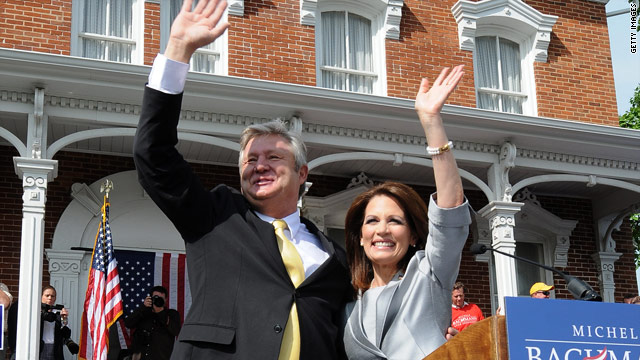 In week one, Bachmann hits the ground running

Lexington, South Carolina (CNN) - No one can accuse Michele Bachmann of being lazy.

The third day of Bachmann's presidential rollout, which began on Monday in Iowa, has been her busiest so far, with rallies planned in four of South Carolina's biggest media markets.

And that's with temperatures hovering above the 90-degree mark.

When not traveling with her staff aboard a private jet hired to get her from Iowa to New Hampshire and finally to South Carolina, the Republican congresswoman from Minnesota is cruising around the state by bus, with a press van in tow.

At each stop along the way, including a rally in a sweltering Lexington parking lot, she has addressed sizeable and enthusiastic crowds with pointed attacks against President Barack Obama and promises to restore the American economy.

Bachmann has stayed after the rallies at length to pose for photographs, sign autographs and kiss babies - all without breaking a sweat.

She wants to make it known, it seems, that her rapid ascent in the polls is no fluke.

One supporter approached Bachmann in Lexington and told her, "You're the real deal!"

"I am, sir," she responded firmly.

Bachmann's husband serves as somewhat of a body person during these campaign stops, hovering constantly by her side and supervising her interaction with the crowds. Sometimes he gets a little too close for comfort.

"Marcus, you got to step back a little bit, you're pushing me off the stage, dear," she admonished him at one point while signing autographs and teetering on the edge of a small dais.

Later, he shielded his wife from the bright sun with an expansive golf umbrella. He also shielded her from the media when necessary.

Bachmann, a fierce crusader for limited government, has worked hard to avoid repeated questions from reporters who want to know more about the income she earned from federal subsides to a family farm and Medicaid payouts to her husband's clinic in Minnesota.

When one reporter Wednesday began to ask a question about the Medicaid payouts, Bachmann quickly cut her off.

"You know what, we're not answering those questions," she said, turning away to sign a Gadsden flag being waved by a nearby supporter.

The campaign put out a paper statement on the matter instead.

In a sign that Bachmann-world is probably not hurting for money, her rallies have been high quality campaign productions featuring press risers, glossy signage and TV-friendly lighting. It is not a low-budget operation.

The campaign press secretary, Alice Stewart, is distributing thumb drives emblazoned with the Bachmann logo to local reporters that include biographical information about the candidate and a hi-res headshot.

The events themselves are being stage-managed by veteran campaign advance man Keith Nahigian, who last worked for John McCain's presidential effort in 2008.

But behind-the-scenes, Bachmann is also putting in some political legwork.

Over the last several days, she has spoken by phone with South Carolina Gov. Nikki Haley and Sen. Jim DeMint - two tea party-friendly Republicans whose endorsements are being sought by all of the presidential candidates.

On Wednesday morning, she had a private meeting with longtime South Carolina GOP fundraiser Robert Royall and two Charleston-area conservative activists, Anne Badgley and Cyndi Mosteller. (Bachmann might not have known that Mosteller supported Democratic candidate Vincent Sheeheen instead of Haley during last year's gubernatorial race.)

And on the way to her third stop of the day in Greenville, the Bachmann bus pulled over in Laurens County to pick up a group of upstate tea party activists including Greenville Tea Party Chairman Chris Lawton.

Bachmann will finish her South Carolina barnstorm on Wednesday evening at a town hall meeting in Rock Hill.