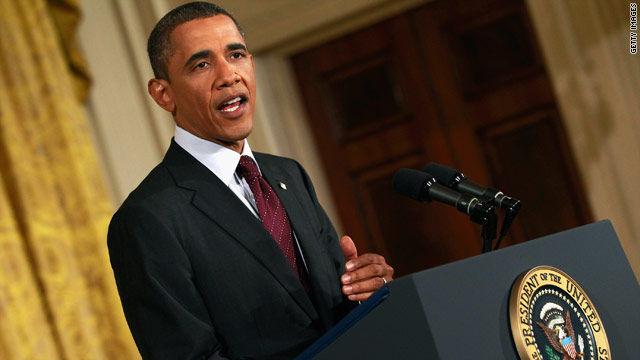 (CNN) - President Barack Obama will hold a news conference Wednesday at 11:30 a.m. ET in the East Room of the White House. Follow live updates below. Read the full story on the presser here.

12:49 p.m. ET - @LisaDCNN: OBAMA DEADLINE: He told Congress if no progress on debt talks by end of this wk, "we'll have to cancel things". Like mid-July recess?

12:47 p.m. ET - @ReincePriebus: “Leaders are going to lead”? If Obama had been leading on fiscal responsibility, he wouldn’t have to raise taxes. http://bit.ly/jlEjse

12:47 p.m. ET - Obama talked about getting letters from regular Americans and they are feeling some desperation. He said we know what to do, educate our kids, invest in infrastructure and we have to control our deficit. These folks want to think their leaders are not playing games. It requires us to get out of short term approach, he said we have to think long term.

12:38 p.m. ET - Obama said his kids finish their homework early. They are 13 and 10 they are not pulling all nighters. Congress can do the same thing.

12:37 p.m. ET - Obama on debt ceiling debate: "I am not engaging in scare tactics." He said I try to be responsible and somewhat restrained so folks don't get "spooked." August 2nd is a very important date, and there's no reason we can't get this done now.

12:36 p.m. ET - "The money has been spent. Obligations have been made," Obama said about the debt ceiling deadline. "This is urgent and it needs to get settled."

12:35 p.m. ET - @EWErickson: Funny how Obama would comment unequivocally about the constitutionality of DOMA, but not on Libya.

12:33 p.m. ET - Obama said Aug. 2 deadline to raise the debt ceiling is a "hard deadline." He stresseed this is a jobs issue ... we have run out of tools to make sure bills are paid. Obama said U.S. government can't pick and choose what bills to pay.

12:32 p.m. ET - Obama called on and congratulates CNN's new Chief White House correspondent @YellinCNN. She asked about debt ceiling – why should the America people believe the Aug. 2 deadline is the final deadline ... what will happen if the debt ceiling is not raised by that date?

12:29 p.m. ET - Shepherd: Obama's last press conference wrapped around this time -after the eighth question. Obama still has not called on CBS or CNN, of the major television networks.

12:28 p.m. ET - Eighth question on gun running in Mexico and e-verify, which deals with hiring practices of immigrants.

12:26 p.m. ET - Obama said we need to restore business confidence and confidence of the American people and we're on track. He said this is a "tough slog" but we're still moving forward.

12:25 p.m. ET - Obama said he was not going to make news today on the same sex marriage question.

12:23 p.m. ET - Seventh question from Wall Street Journal. They asked about deficit and debt talks and whether he supports same sex marriage?

12:23 p.m. ET - Obama said he would accept Gadhafi stepping down in a way he would no longer be in charge of the Libyan military. "He needs to step down, he needs to go."

12:19 p.m. ET - Sixth question from Jim Sciutto of ABC News, on Libya: Are you prepared for this operation to last another year and what is success?

12:18 p.m. ET - @rolandsmartin: Smart move by POTUS to make the argument that our Afghan policy is about beating Taliban/Al-Qaeda, not about building schools/roads

12:18 p.m. ET - Obama said he laid out a plan to draw down troops in a responsible way, adding that the U.S. understands Afghanistan is still a dangerous place. He again said "the tide of war is receding."

12:17 p.m. ET - What's an Afghanistan victory? Obama said he used the word "success" but not "victory." He said he laid out a plan in which we are going to draw down troops after "10 very long years" but we will draw them down in a responsible way that will allows Afghanistan to defend itself and give us the opportunity to continue to put operational pressure on al Qaeda.

12:15 p.m. ET - Fifth question Mike Emanuel from Fox: Can you define what is "victory" in the war in Afghanistan, you haven't been using that word to describe the mission there?

12:14 p.m. ET - Obama said the goals are to apprehend those who attacked the U.S ... get all the intelligence we can that is consistent with due process of law and try them according to the rule of law. He said we do have a process to work through all the agencies – DoD, FBI, etc. – to think through on a case-by-case basis to figure out how a particular individual should be dealt with.

Their mission is to apprehend the individual, they do so safely – American people be assured that any time we initiate a mission like this, our priority to make sure this individual cannot carry out attacks on the U.S. and gather as much intelligence as possible.

12:09 p.m. ET - @LisaDCNN: OBAMA: business always complains about regs. I have obligation to uphold smart regs. We are reviewing all regs to look for bad ones.

12:08 p.m. ET - Continuing on the economy, Obama said we can focus on jobs and focus on debt and deficit reduction. He said we "have to be able to walk and chew gum at same time"

12:08 p.m. ET - Goldberg also asked about the National Labor Relations Board-Boeing fight -a big topic on the campaign trail for GOP presidential candidates. Obama appears to be waiting until the end of answer to comment.

12:06 p.m. ET - Obama said it's important to look at the tax code. A whole range of things we could be doing to create jobs, used the trade deal with Korea as an example.

12:05 p.m. ET - Third question from Julianna Goldberg from Bloomberg ... debt and deficits, is the debate keeping you from creating jobs?

12:03 p.m. ET - @CNNPolitics: Obama: "We cannot defend the fed govt poking its nose into what states are doing & putting a thumb on the scale against same sex couples."

12:03 p.m. ET - Obama on NY legalizing gay marriage: What happened last week "was a good thing" – we saw the people of New York having a debate, talking through issues, but ultimately they made a decision to recognize civil marriages. Obama said he thinks that's how it ought to work.

12:01 p.m. ET - @rolandsmartin: POTUS turns around and says he doesn't think DOMA is constitutional. You can't have it both ways.

11:57 a.m. ET - On Libya: Obama said Gadhafi was responsible for more American deaths than just about anybody else on the planet – before Osama bin Laden. He said "we have done exactly what I said we were going to do" – have not put boots on the ground ... not seen a single U.S. casualty ... there's "no risk" in escalation. Obama added on Gadhafi: We've got him "pinned down and the noose is tightening around him."

11:54 a.m. ET - Obama said hopefully sooner rather than later Republicans will make "the right decisions for the country" ... everyone else has been willing to move from their maxims position and he's hoping Republicans will do the same.

11:53 a.m. ET - Obama said "we will reach a deal that will require our government to live within its means," while inspiring confidence in the business community.

11:52 a.m. ET - Schultze: Obama said everyone says we need a balanced approach. He said we are gonna have to look at entitlements and reduce costs. He said if everyone will give up something then Republicans should give up tax breaks for the wealthy. Obama said you can't reduce the deficit without revenue increase.

11:52 a.m. ET - Obama said any agreement on the deficit will include "tough decisions and balanced solutions." He said Democrats and Republicans can "bridge our differences" in "a way that does not hurt our economy right here, right now."


Click to watch video
11:49 a.m. ET - Obama said what we've seen in negotiations is a lot of people say a lot of things to satisfy their base and get on cable news, but hopefully leaders rise to the occasion. He said that's what I expect to happen this time. "Call me naïve" ... but my expectation is that "leaders will lead."

11:49 a.m. ET - White House Producer Emily Schultze: First question from Ben Feller of the Associated Press: Are tax increases a red line for you? This is in reference to raising the debt ceiling and the ongoing negotiations.

11:47 a.m. ET - "We got to seize this moment," Obama said on debt talks – said Obama/Biden will continue negotiations with both parties "for as long as it takes."


Click to watch video
11:46 a.m. ET - Obama said it's only fair to ask an oil company or corporate jet owner to give up a tax break that no other company enjoys ... said he doesn't think that's all that radical.

11:45 a.m. ET - Vice President Biden's debt talks ... can't get to the $4 trillion of savings we need by cutting just 12 percent of the budget ... going to need to look at the whole budget…eliminate waste wherever we find it ... trimming the defense budget ... tackle entitlements…reform the tax code. Obama said he spent the last two years cutting taxes for ordinary Americans ... said he wants to get rid of tax cuts for millionaires and billionaires.

11:43 a.m. ET - Obama said there are things Congress can do right now to create more jobs ... there are pending bills in Congress that they can send to his desk, including Free Trade deals.

11:40 a.m. ET - Shepherd: Obama opened with remarks about the economy. Said a lot of folks still struggling with the effects of the recession ... struggles of the middle class families were a big problem before the recession hit in 2007 ... our economic challenges are not going to be solved overnight.

11:28 a.m. ET - @LisaDCNN: GET READY: Obama newser in two minutes (or so), GOP newser probably to start just a few minutes after that.

11:17 a.m. ET - @rolandsmartin: I expect Obama to be asked about gay marriage, Libya, debt ceiling, maybe even Gingrich, Bachmann saying he does nothing for blacks & jobs

11:05 a.m. ET - @SpeakerBoehner: Here are 7 questions about #jobs for President Obamas news conference: http: http://j.mp/mBU1bg What are your Qs for POTUS?