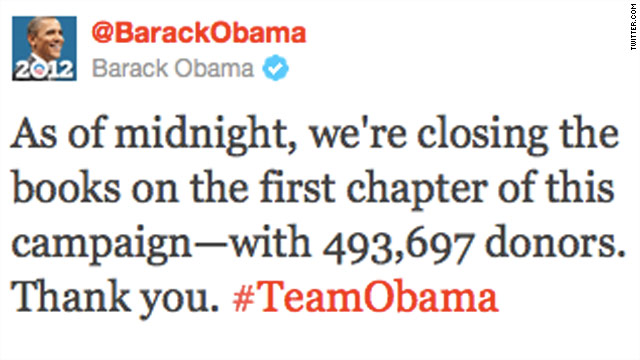 (CNN)-No word yet on whether President Obama reached a $60 million fundraising goal by the close of the second quarter, but according to a tweet from the president’s re-elect campaign staff, almost half a million donors contributed toward the effort.

The official Twitter account for the Obama 2012 campaign tweeted a thank you to contributors shortly after 12 a.m. saying, “As of midnight, we’re closing the books on the first chapter of this campaign-with 493,697 donors. Thank you.”

The second quarter of presidential campaign fundraising closed at midnight on June 30.

The president attended two fundraisers in the final hours before the deadline late Thursday-both were expected to net $2.5 million for his re-election campaign. He asked top donors to haul in $60 million by the end of the second quarter during a presentation in early June.

Money raised is expected to go towards the Democratic National Committee as well as the president’s re-election campaign.