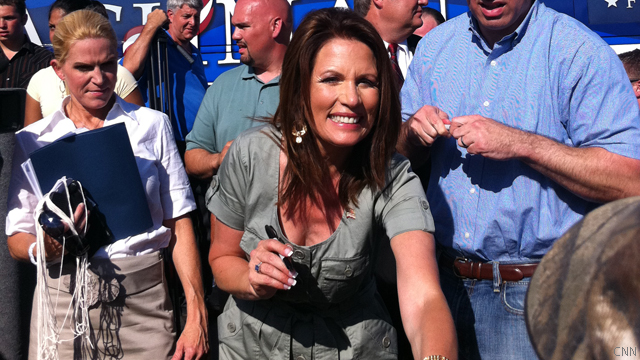 Bachmann: I'll help Obama find a job after I win

On Saturday, the Minnesota congresswoman took fresh jabs at the president. In one instance, Bachmann said she hoped to oust him from his current employment, become president herself - and then help Obama find a job. Bachmann also blasted "Obamacare," saying it would cost American jobs and questioning if Obama "was in his right mind" for championing it.

The comments came as Bachmann headlined an enthusiastic yet sparsely populated Tea Party rally at the state capitol in Des Moines, Iowa. Earlier Saturday, in Iowa City, the candidate launched a bus tour through the first-in-the-nation caucus state.

As she served up red meat to the assembled conservatives, Bachmann took aim at Treasury Secretary Tim Geithner - and the president - over the economy.

Later, she continued a common Republican refrain - that the nation's health care law should be repealed. But Bachmann put a spin on that argument, citing figures that claim the law would bleed jobs on top of those already lost in the troubled economy.

Saying the president "has cost this economy millions of jobs," Bachmann questioned "who, with all due respect, in their right mind would propose a massive government takeover [of health care]" that would cost thousands of jobs.

It's unclear if such talk is part of an amped-up strategy by Bachmann or simply new variations on well-worn attack lines. Whatever the case, it is not without risk. Polls generally show that while conservative voters like the tough talk, such language could turn off critical blocs of independent voters.

Last week, she told a crowd in South Carolina, "And we think that there is a certain Hawaiian president who should go back to Hawaii!"

And at a recent conference of Internet-savvy conservatives in Minneapolis, Bachmann used an unusual line of attack.