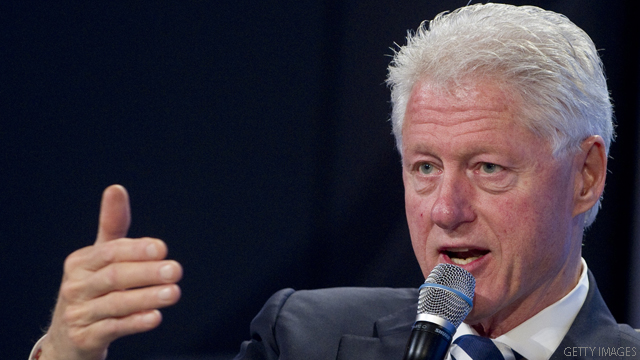 "This is the political equivalent of the government shutdown when I was president..." Clinton said.

Clinton did not know how Obama could avoid a repeat shutdown, but insisted that the president stand his ground. "First, the White House could blink," Clinton said. "I hope that won't happen. I don't think they should blink."

Clinton made his argument in front of a large crowd at the left-leaning Aspen Ideas Festival in Colorado Saturday. Should the United States default on its payments, the country's credit ratings will decline, Clinton said, and interest rates could rise.

An economic recovery will require both a healthy private sector and an effective government, Clinton said.

To prove that point, President Barack Obama and the Democrats should immediately accept previously agreed-upon spending cuts with Republicans that would allow the government to continue to run for another six to eight months. Then both parties must work together toward serious budget reform, which cannot possibly happen by August 2, he added.

Republicans have done the right thing by conceding on defense cuts and reducing ethanol subsidies, Clinton said. Still, both parties must accept many of the recommendations of a bipartisan commission led by former Republican Senator Alan Simpson and former Clinton Administration Budget Director Erskine Bowles. Among these proposals, tax loopholes would be eliminated and Medicare reformed.

Clinton went a step further and proposed that corporate tax rates be reduced to 25% from the current range of 35%-23%, depending on filing. Then, with tax loopholes eliminated, revenues could rise $1 trillion, as indicated by the Bowles-Simpson report.

Still, no budget plan can be passed without focusing on rising health care premiums in the private sector, Clinton said. Republican Congressman Paul Ryan's proposal is serious, he said, but it's wrong because it blames government for rising health care costs.

Medicare premiums are based the costs of private-industry premiums, Clinton explained. Thus, the Ryan plan could actually increase Medicare expenditures. "This country cannot afford to mess up this debate," Clinton passionately said. "There's a lot of stuff out there that is pure bull."

Clinton also handicapped the upcoming 2012 Republican contest, lauding former Utah governors Jon Huntsman and Mitt Romney. Minnesota Congresswoman Michele Bachmann is "a much better candidate than I thought," Clinton admitted. "I don't agree with anything she says, but she's got a lot of juice and she appeals to the anti-government crowd."

Regardless of the Republican field, however, Clinton believes Obama will be re-elected in 2012. Under Obama's leadership, Wall Street has been salvaged, and the automotive industry has been saved, Clinton said. Also, manufacturing jobs have increased with the United States now building 20% of the solar batteries globally - up from 2%. That could go up as high as 40% by 2014, the former president added.

Obama has also delivered on national security with the killing of Osama bin Laden and increased drone activity in terrorist countries, Clinton said. Domestically, he has offered laudable education and health care reforms, as well as student loan reforms that allow borrowers longer time to pay back their debts, Clinton said.

And, at a time when European multiculturalism is apparently failing, Obama's been able to speak to the diverse sectors of the U.S. population, Clinton said.