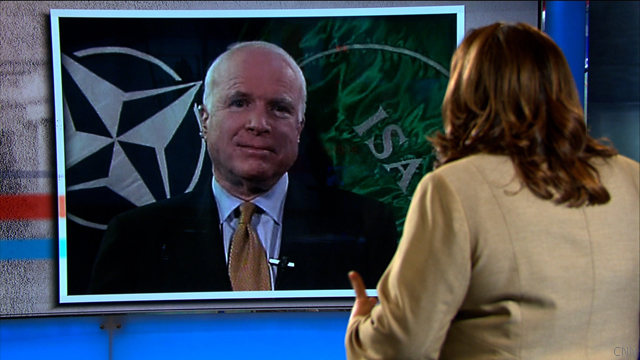 Washington (CNN) - The American people do not want Republicans to compromise on their opposition to any form of tax increase as part of a deficit reduction deal being negotiated with Democrats, veteran Sen. John McCain, R-Arizona, said Sunday.

“The principle of not raising taxes is something that we campaigned on last November and the results of the election was the American people don’t want their taxes raised and they wanted us to cut spending,” McCain said on CNN’s “State of the Union.” “They don’t want compromise.”

Read what other lawmakers said Sunday.

Republicans have tied a deficit reduction agreement to the federal debt ceiling, which the Obama administration says must be raised by August 2 to avoid harm to the nation’s sluggish economic recovery.

Bipartisan negotiations led by Vice President Joe Biden recently hit an impasse over the tax issue, with Democrats calling for eliminating some tax breaks and loopholes to increase revenue while Republicans rejected such steps.

President Barack Obama highlighted the stand-off at a news conference last week in which he chided congressional Republicans for refusing to make “tough decisions” that might anger their conservative base.

At the heart of the GOP resistance is a bedrock principle pushed by anti-tax crusader Grover Norquist against any kind of tax increase at all. A pledge pushed by Norquist's group, Americans for Tax Reform, has been signed by more than 230 House members and 40 senators, almost all Republicans.

Norquist and his supporters want to shrink the federal government and believe any new revenue would enable continued government growth.

However, some Republicans, including conservative Sens. Tom Coburn of Oklahoma and Lindsey Graham of South Carolina, have expressed support for increased tax revenue as part of a deficit reduction deal, and the Senate recently supported ending ethanol subsidies - which would increase revenue.

Tax loopholes targeted by Democrats include oil and gas subsidies, as well as some write-offs for people earning more than $500,000 a year.

To McCain, the danger from continuing to let the federal deficit expand without taking substantive cost-cutting steps is much greater than the threat from failing to increase the federal debt ceiling by August 2.