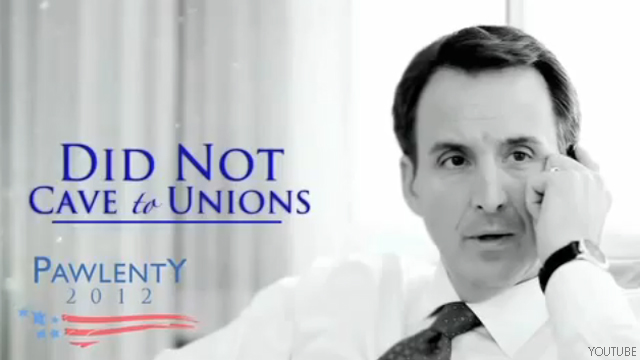 (CNN) - Republican presidential candidate Tim Pawlenty will air a new ad Wednesday in Iowa touting his history of "results, not rhetoric" as governor of neighboring Minnesota.

The 30-second spot chronicles the state's transit strike in 2004 and government shutdown in 2005 while he was governor as examples of his willingness to stand up to labor unions and Democrats in the state's legislature.

Spokesman Alex Conant said the ad is "part of the effort to introduce him to Iowa and tell his story of winning big fights in Minnesota."

"Our belief is that as voters learn more about Gov. Pawlenty's record of conservative results, they will support him," Conant said.

The spot in the first-in-the-nation caucus state is the second wave of ads for the White House hopeful and comes as the Minnesota government enters the fifth day of a shutdown over budget disagreements.

With a $1.4 billion budget gap, Democratic Gov. Mark Dayton wants to raise taxes on the wealthiest 1.9 percent of Minnesotans and cut spending. Republican state lawmakers will not accept a tax hike.

The Democratic National Committee responded to the Pawlenty ad with a "fact check" criticizing his past in Minnesota.