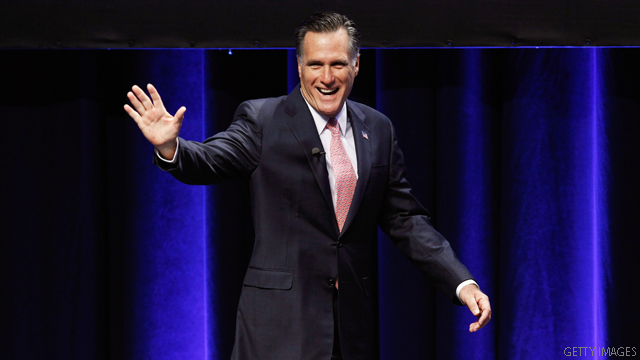 More than one-third of likely Republican primary voters–35 percent– said they would vote for Romney, who also sought the GOP nomination in 2008. Twelve percent said they'd back Bachmann.

But support for the three-term congresswoman has increased by 8 percentage points since a well-received performance at the first CNN/WMUR/New Hampshire Union-Leader GOP primary debate and the formal announcement of her presidential bid in June.

With single-digit support, Texas Rep. Ron Paul and former New York Mayor Rudy Giuliani, who has not announced a bid for the 2012 Republican nomination for president, are tied at seven percent in the poll. Former Minnesota Gov. Tim Pawlenty and former Alaska Gov. Sarah Palin, another candidate still mulling over a bid, are also all tied up at three percent support each.

The top pick for Republican primary voters fares well against incumbent President Barack Obama in the poll, and better than any other potential GOP nominee: Romney leads Obama 47 to 43 percent in a hypothetical matchup. But the four-point margin falls within the poll's sampling error, indicating the match is statistically tied.

Most voters simply haven't made up their minds. Three-quarters of voters likely to vote in the first primary in the nation say they're still trying to decide whom to support for president.

And of all those questioned, two in 10 know whom they wouldn't support: Sarah Palin. Twenty-three percent of likely Republican primary voters say they would not vote for the 2008 GOP vice presidential nominee under any circumstances-more than any other GOP candidate in the field.