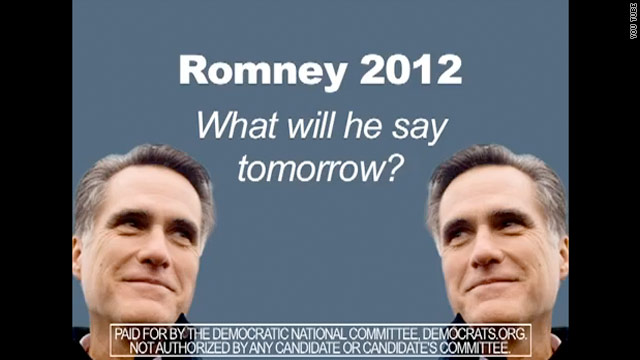 (CNN) - Despite continued push-back from Democrats, Republican presidential candidate Mitt Romney stuck to his line for a second straight day that President Obama has made the American economy worse.

"He made the recession deeper, last long and recovery more anemic," Romney said Tuesday at a town hall in New Hampshire. "He made things worse."

The newest iteration of the line comes one day after he made similar statements in New Hampshire, which resulted in a new web video from the Democratic National Committee. The spot juxtaposed his comment Monday that "the recession is deeper because of our president," with seemingly contradictory sound Friday in Pennsylvania.

"I didn't say that things are worse, what I said was that the economy hasn't turned around," Romney said Friday when asked to clarify his words.

The former Massachusetts governor first made a similar comment at the CNN/WMUR/New Hampshire Union Leader presidential debate in June when he said the president "didn't create the recession, but he made it worse and longer," and again during a visit to New Hampshire last week.

When asked about the governor's comments, Romney spokesperson Andrea Saul pointed to the current economic situation, including the unemployment rate, housing prices and national debt.

"It is an undeniable fact that Barack Obama has failed to create jobs and fix the economy. He is on track to be the only president to leave office with a net job loss," Saul said. "President Obama and the Democrats will spend the next 17 months trying to distract voters from their horrible record on the economy – and it's not going to work."

"Mitt Romney has well earned a reputation as someone who changes positions with the political winds, but this is just taking things too far," Woodhouse said in a statement. "Does he really think no one is paying attention?"