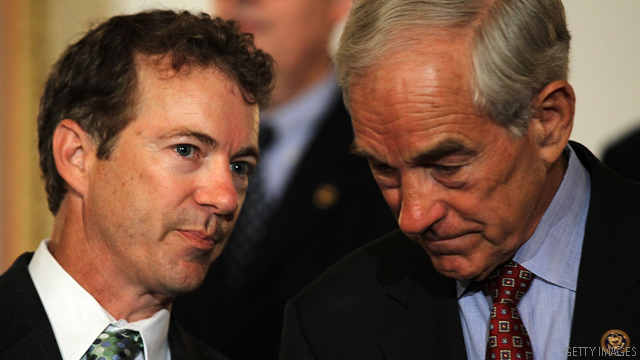 A Paul family affair: Rand to stump for Ron in Iowa

(CNN) - Republican Sen. Rand Paul of Kentucky will head to the first-in-the-nation caucus state of Iowa later this month to campaign for his father's bid for the White House.

The younger Paul's Iowa swing will come just before the Ames, Iowa, straw poll. GOP Rep. Ron Paul of Texas, who's making his third run for the presidency, is putting a lot of money and effort into doing well in the crucial straw poll.

This is the first time Rand Paul will campaign for his father since Ron Paul formally announced his run for president May 13. But the senator did stump for his father during swings through Iowa and New Hampshire, the first in the nation primary state, earlier this year before the elder Paul announced his candidacy.

Ron Paul headed to Kentucky twice last year to campaign for his son's bid to win the open Senate seat.

The Paul presidential campaign told CNN the two men will not appear together during Rand Paul's events in Iowa. The elder Paul is holding campaign events in Marshalltown and Cedar Falls, Iowa Wednesday.

"Rand Paul's message strikes a strong chord with the Tea Party here in Iowa," said Drew Ivers, Ron Paul's Iowa chairman, in a statement. "His message of stopping out of control federal spending is exactly what the Republican party needs at this time."

Earlier this year, Rand Paul considered a White House run of his own if his father passed on making a bid.