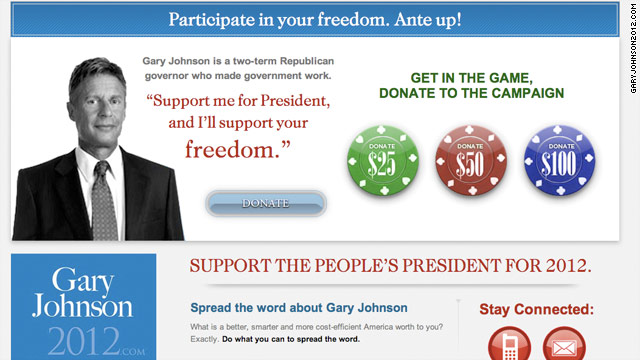 The former New Mexico governor's campaign website includes a "You're Getting a Raw Deal" page. On it, he pledges to support the card players' rights.

"The federal government should not be involved in restricting lawful commerce that doesn't harm anyone," Johnson wrote. "Support me for President, and I'll support your freedom. Get in the game, donate to the campaign."

PokerNews.com reported that Johnson is slated to attend the TwoPlusTwo.com World Series of Poker party Thursday night at the Wynn poker room in Las Vegas, Nevada.

"For a presidential candidate to actively recruit support from the poker-player constituency shows how much respect poker and poker players have gained in D.C. over the past five years, even if the status quo remains bleak," Poker News' Matthew Kredell wrote. "Even today, only a fringe candidate would go out on that ledge to court poker players. But for any candidate at all to see value in the poker vote is progress."

Johnson, a former business owner, is polling in the low single digit support in several nationwide polls since announcing his bid on April 21.