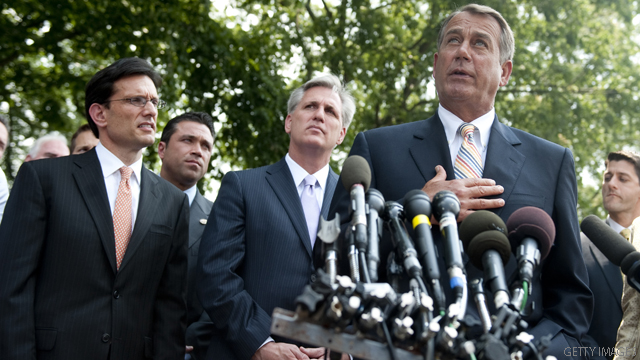 (CNN) - Republicans are seizing an opportunity from President Obama's impending Twitter town hall to play politics and attack the president over the economy.

Obama will answer questions Wednesday on jobs and the economy submitted via Twitter with the hashtag #AskObama. Some Republicans submitted questions of their own.

Members of the Republican leadership in the House, including House Speaker John Boehner, Majority Whip Rep. Kevin McCarthy of California and Rep. Paul Ryan of Wisconsin tweeted queries to the president Wednesday morning.

"#GOP has a plan #4job growth. What is your economic plan? 798 days & still no budget from Dems. #AskObama #tcot," read one tweet.

Boehner used the social media network to question the president over sticking points in the deficit negotiations.

"Will you take job-destroying tax hikes off the table? #AskObama," Boehner wrote.

GOP presidential candidate Mitt Romney issued his own list of hashtags to describe Obama's track record on the economy, including #FailedTheEconomy, #9.1%UnemploymentRate, #HighGasPrices and #SkyrocketingSpending.

The Republican National Committee sent seven questions to Obama via a press release asking "Where are the jobs?"