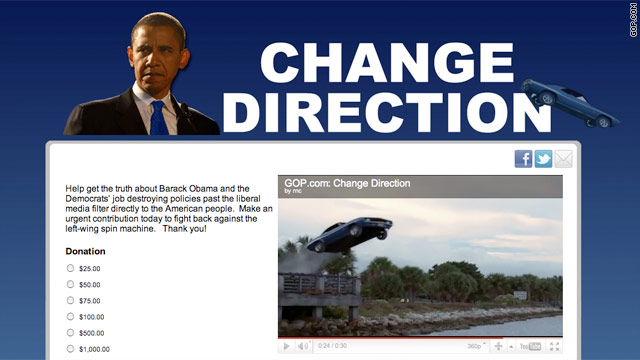 RNC to Obama: You're taking the country off a cliff

(CNN) - A new ad from the Republican National Committee Wednesday blames President Obama's "left turn after left turn" for the current state of the economy.

The 30-second spot will air nationally on cable television, notably in battleground states, throughout the month. It uses a crashing car metaphor to make the case for a Republican president in 2012.

RNC Chairman Reince Priebus said his organization "intends to challenge Barack Obama in every state on his failed economic leadership right up until Election Day."

"Republicans have already changed the conversation in Washington, but with the President unwilling to remove the country from its unsustainable course, it's time to change direction," Priebus said in a statement.

Brad Woodhouse, communications director for the Democratic National Committee, said Republicans are trying to "mislead voters about the state of the economy."

"While the President continues to fight to clean up an economic mess that was years in the making, Republicans would rather run negative ads than offer positive ideas," Woodhouse said in a statement.