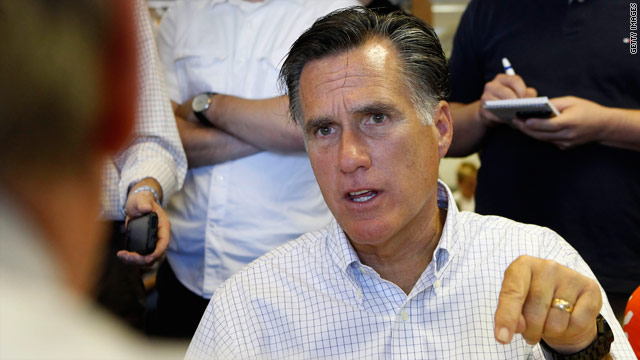 "We intend to raise $50 million and more for the primary campaign, and we're off to a very good start," campaign spokeswoman Andrea Saul said in a statement.

The statement was released after Politico reported a Romney
fundraiser had sent an email in late December stating $50 million was the campaign's initial goal for the first half of 2011.

Earlier on Wednesday the Romney campaign announced it had raised $18.25 million in the past three months, putting the former Massachusetts governor far ahead of his GOP rivals in the battle for campaign cash.

Romney's campaign also reported that as of July 1 they have $12.6 million in the bank, and that all the money raised in this year's second quarter is for the primaries rather than the general election.

The campaign added that funds were raised in all 50 states and the District of Columbia.

"Voters are responding to Mitt Romney's message that President Obama's policies have failed and that we need new leadership in Washington. Our fundraising for the second quarter represents the strong support Mitt Romney has across the country," said Romney for President National Finance Chairman Spencer Zwick, in a statement.

More than half of the money raised in the April through June period was brought in or pledged during a one-day phone bank fundraiser held in Las Vegas on May 16. Last week Romney aides predicted the campaign would bring in between $15-$20 million.

Romney's figures put him far ahead of his rivals who have reported their second quarter numbers. Rep. Ron Paul of Texas, who's making his third bid for the White House, reported raising $4.5 million. Former Minnesota Gov. Tim Pawlenty reported bringing in $4.2 million, with former Utah Gov. and former U.S. Ambassador to China Jon Huntsman raising $4.1 million. Huntsman didn't announce his candidacy until June 21, late in the second quarter. Nearly half of haul was a donation of his own money. Former Godfather's Pizza CEO and radio talk show host Herman Cain reported raising $2.46 million, which also included some self funding.

Romney did not make any personal contributions to his campaign during the past three months. In first bid for the GOP nomination four years ago, he raised $65.1 million and in addition loaned his campaign $42.3 million.

Romney's $18.25 million brought in the past three months is lower than the $23.4 million (including a $2.35 million personal donation) he raised in the first three months of 2007, a comparable quarter from his first run for the presidency.

Among those who have yet to report their fundraising numbers are Rep. Michele Bachmann of Minnesota, who has jumped in the polls since her performance at a CNN/WMUR/New Hampshire Union Leader presidential debate last month. Bachmann's campaign says they'll reveal their figures on July 15, the filing deadline for the second quarter.

Besides his large fundraising haul, Romney should also be helped by a super political action committee formed by some of his former advisers, which is independently working to assist Romney's battle for the GOP nomination. The super PAC, called "Restore Our Future," announced Tuesday that it had brought in $12 million the first six months of this year.