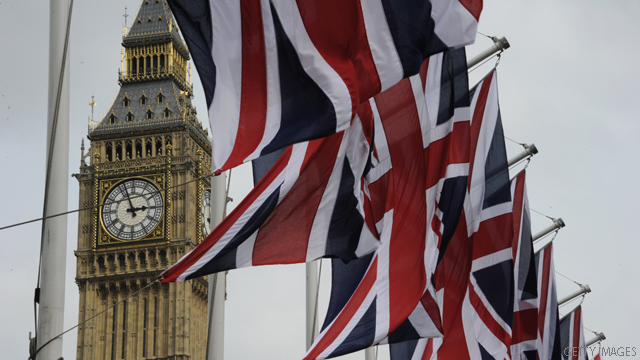 Romney met with British Secretary of State for Defense Liam Fox and former Prime Minister Tony Blair before the fundraiser, said a source familiar with the meetings.

Romney, who experts say has the strongest donor network, brought in $18.25 million in total receipts for the second quarter ending June 30, according to his campaign. The money raised at the London event will give him a head start toward what he hopes will be an impressive haul for the current quarter, which began July 1.

According to its website, Dartmouth House is an elegant mansion ideal for weddings, cocktail parties and business functions. It has Louis XIV walnut paneling and can host up to 350 guests.

A copy of the invitation, first obtained by the Boston Globe, lists a suggested contribution of $2,500, meaning the campaign could bring in as much as $875,000.

The Romney campaign refused to discuss details of the fundraiser, calling it a private event.

"There is a lot of interest in this election among Americans living abroad who like everyone else are worried about what the weak economy and lack of jobs means for our status in the world," campaign adviser Eric Fehrnstrom said in a statement. "They want to know if we are going to lead the world economically or become something less."

Only U.S. citizens or green card holders can contribute to an American presidential campaign.

"It's not surprising that he's going there. There are significant funds that can be raised there," Republican consultant Doug Heye, who is not affiliated with any presidential campaign, told CNN. "He could have an impressive haul. It's a donor community that basically has not been touched since 2008."

Not only does London hold a lot of potential cash from Americans working in the banking and financial industries, but the event could also draw citizens working in other European countries.

Former New York City Mayor Rudy Giuliani visited London in September 2007 as the first presidential candidate to travel abroad for a fundraiser. Barack Obama and John McCain also traveled across the pond during the 2008 campaign to raise money.

While in London on Thursday, Romney is scheduled to sit down with British National Security Adviser Peter Ricketts. It is also possible Prime Minister David Cameron could drop by the meeting, sources with knowledge of the meeting told CNN.