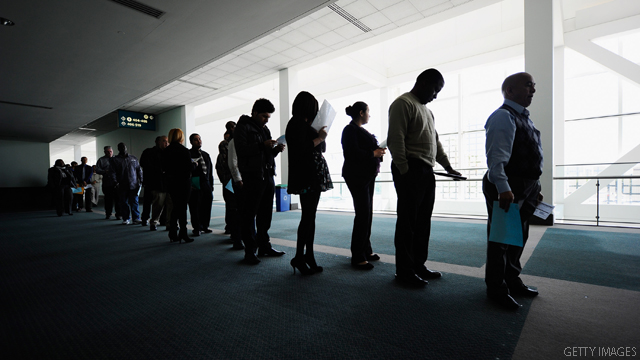 Political battle over the jobs

Former Massachusetts Gov. Mitt Romney said the president "has failed to get this economy moving again."

“Today’s abysmal jobs report confirms what we all know," Romney said in a statement. "The White House has turned the audacity of hope into the audacity of indifference.”

He also took a swipe at the president's campaign manager, David Plouffe, who earlier this week said "People won't vote based on the unemployment rate."

"The average American does not view the economy through the prism of GDP or unemployment rates or even monthly jobs numbers," Plouffe said at a breakfast organized by Bloomberg News.

"If David Plouffe were working for me, I would fire him and then he could experience firsthand the pain of unemployment," Romney said.

The economy gained just 18,000 jobs in June, with the unemployment rate rising from 9.1 percent to 9.2 percent, the government reported Friday.

Former Utah Gov. Jon Huntsman called the rise in unemployment "not acceptable," adding that the patience of the American people has "worn thin."

"We need free-market, pro-growth policies to spark a wave of job growth – the same policies we implemented in Utah to make it the fastest-growing state in the nation," Obama's former U.S. ambassador to China said in a statement. "America needs new leadership to turn our country around."

Minnesota Rep. Michele Bachmann, who was the first major GOP presidential candidate to issue a statement, labeled the report a "failure" and delivered a message to Obama: "Mr. President, it's time to take the shovel out of your hand and stop digging. ATM's aren't responsible for our high unemployment rate; your administration's threat of higher taxes, massive government spending, and overregulation are."

Former Minnesota Gov. Tim Pawlenty said the president is "out of answers and running out of time."

"His policies are not creating the necessary jobs and he has no plan to do anything about it," Pawlenty said in a statement. "I will turn around the economy as president by setting bold growth goals and implementing specific proposals to achieve them."

Former Sen. Rick Santorum of Pennsylvania similarly said the report is "one more sign that the current Administration's policies are impeding economic growth in America" and that he looks forward to a debate with the president.

“Americans can’t wait any longer for the hand-wringing to produce results," Johnson said in a statement. “The politicians in DC like to make us think these types of actions are complicated and difficult. They aren’t."

Former House Speaker Newt Gingrich posted a video on his website saying the economy could turn around with "tax cuts, regulation reform and an American energy policy," steps "the Obama administration seems incapable of doing."

Priorities USA Action, the Democratic super PAC started by two former senior members of the Obama administration, released their own response, accusing Republicans of "playing a reckless and irresponsible game with the American economy."

"Hundreds of days after taking control of the House, Republicans have done nothing but stand in the way of progress on the economy," senior strategist Bill Burton said in a statement. "Every day they obstruct progress it seems more and more as if they believe they benefit politically if they hurt America economically."

Chairman of the president's Council on Economic Advisers, Austan Goolsbee, said this month's report "reflects the recent slowdown of economic growth due to headwinds faced in the first half of this year."

Although the unemployment rate ticked up, Goolsbee said the report also shows that private sector payrolls increased by 57,000.

"The unemployment rate remains unacceptably high and faster growth is needed to replace the jobs lost in the downturn," Goolsbee said in a statement.

But he also cautioned Americans "not to read too much into any one monthly report."

"Why if the Obama Administration acknowledges this economic truth, they still fail to enact business-friendly policies that would get America's jobs creators hiring again," Cain said in a statement.

According to numbers released in May, Nevada's unemployment rate rests at 12.1 percent with Florida's at 10.6 percent, Michigan's at 10.3 percent and North Carolina's at 9.7 percent.

The president's overall approval rating in most national polls stands in the mid-to-upper 40s, but his numbers on the economy and jobs range between the upper 30s and 40 percent.