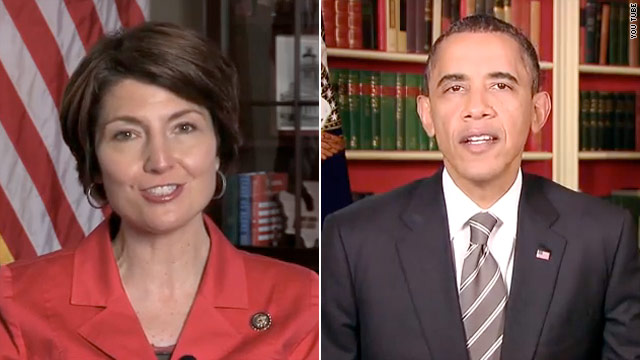 Both sides call for cooperation in debt reduction talks

(CNN) – With the deadline for the debt ceiling negotiations rapidly approaching, President Barack Obama called on Democrats and Republicans to work together to find “a balanced approach” to solving the nation’s debt crisis.

“Right now, we have an extraordinary – and extraordinarily rare – opportunity to move forward in a way that makes sure our government lives within its means,” Obama said in his weekly address. “And I’m hopeful that we will rise to the moment, and seize this opportunity, on behalf of all Americans, and the future we hold in common.”

The Treasury Department has warned that failure to raise the nation’s $14.3 trillion debt ceiling by August 2 could lead to a possible default, which could provoke skyrocketing interest rates and cause the dollar to plummet.

But both parties have thus far been unable reconcile their radically divergent strategies to solve the nation’s economic crisis, as Republicans refuse to raise taxes in a weak economy and Democrats denounce proposed cuts to entitlement programs as draconian and unacceptable.

In the GOP weekly address, Rep. Cathy McMorris Rodgers of Washington, said, “There can be no increase in the national debt limit unless it is accompanied by serious spending cuts and reforms.” McMorris Rodgers, the House Republican Conference vice-chair, blasted the Democratic-led Senate for failing to consider any of the job creation bills proposed by the House.

In his address, Obama conceded that the two sides still have “real differences in approach,” but said there is agreement on “some of the big things.”

“We agree that after a decade of racking up deficits and debt, we finally need to get our fiscal house in order. We agree that to do that, both sides are going to have to step outside their comfort zones and make some political sacrifices,” Obama said.

A bipartisan group of eight congressional leaders met behind closed doors with Obama at the White House Thursday to try to hammer out an agreement to raise the limit, but no deal was reached. The group said it will meet again on Sunday afternoon.

In his address, Obama also argued that an agreement is necessary for reducing the nation’s high unemployment rate, which was thrust back into the spotlight Friday after a disappointing jobs report showed that the economy added only 18,000 jobs in June.

“By getting our fiscal house in order, Congress will be in a stronger position to focus on some of the job-creating measures I’ve already proposed,” Obama said.

But Republicans blamed the low job creation numbers on Obama’s fiscal policies and used the dismal report to blast Democrat’s push for tax increases in the debt negotiations.

“If we’ve learned anything, it’s that we cannot spend, tax, or borrow our way to prosperity. To create jobs and set our country on a sound fiscal course, we must stop spending money we don’t have,” McMorris Rodgers said in her address.

“From the look of things, the Democrats who run Washington don’t have a jobs plan; they have a spending agenda. They’re proposing a rehash of what’s already been tried: more spending, more taxes, and bigger government,” she said.

But while there was little agreement in the dueling addresses, both Obama and McMorris Rodgers concurred on one point: both sides need to work together.

“Mr. President, Americans are asking you, ‘Where are the jobs?’ We invite you to change course and work with us to empower, not burden, our nation’s small businesses, families, and entrepreneurs. We can do this if we work together,” McMorris Rodgers said.

Obama, too, called on a unified approach.