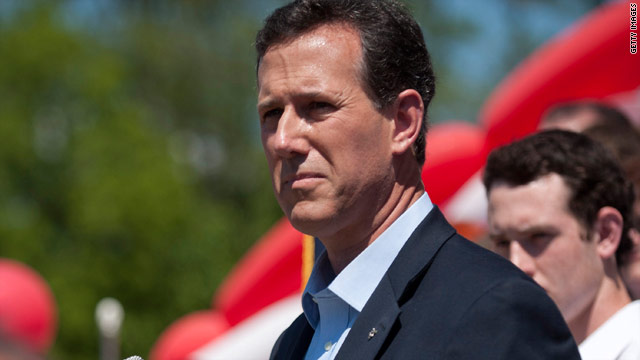 “When I first read it, I was taken aback by it. I can't argue that I wasn't,” the former Pennsylvania senator said in an interview airing Sunday on CNN’s “State of the Union.”

“The Marriage Vow – A Declaration of Dependence Upon Marriage and Family,” is the creation of The Family Leader, an Iowa-based conservative Christian group, and its CEO, Bob Vander Plaats.

"If you are looking at being at a leader of our great country, we would like to have you pledge personal fidelity to your own spouse and a respect for the marital bonds of others,” Vander Plaats told Iowa reporters, according to the Des Moines Register.

Other provisions in the pledge include promises to only appoint conservative judges, to remove anti-traditional marriage provisions in the tax code and opposition to any constitutional redefinition of marriage.

But despite his initial surprise at the reach of the pledge, Santorum told CNN Chief Political Correspondent Candy Crowley that he “certainly felt comfortable signing it.”

“I pledged personal fidelity to my wife when I was married to her. And pledged the same, that I would not involve myself in any other relationships with anybody else who is married. So that's a pledge I've taken and I take every single day when I - as a married person - and feel very comfortable making that public statement,” Santorum said.

The conservative former senator has made least 15 trips to Iowa since December 2010, and just wrapped up a 10-city tour of the first-in-the-nation caucus state this week.